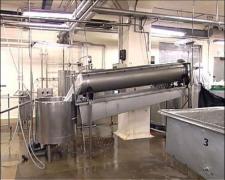 
Food processing techniques have been evolving since the Stone Age. But it was not until these procedures met with the machinery, scientific discoveries, mass production, and population changes of the nineteenth century that the activity of food processing surged ahead and became the basis for a sophisticated and far reaching industry. By the middle of the twentieth century, this industry included everything from the most basic preparation of foods to canning, freezing, otherwise preserving, and packaging of finished products for distribution throughout the world.

In the nineteenth century the United States experienced an expansion of industrial cities, similar to the pattern that Great Britain had experienced in its industrial revolution. But the United States had an additional factor: westward expansion and settlement. The geographic relationship between the western plains and eastern urban centers was crucial for the beginnings of the food processing industry. This relationship led to inventions, discoveries, and manufacturing systems that would determine the industry's evolution. In the United States the need for food was driven by the concentration of population on the eastern seaboard. Westward expansion into the plains opened a vast area where farmland was abundant and livestock breeding was inexpensive. Transportation and communication systems connected the urban centers with the developing west. Such connections ultimately provided the industry with the means of getting food that was produced in the west to the areas of need in the east. Also, manufacturing centers in the east provided the food processing industry with the labor, machinery, and the manufacturing systems necessary to mass-produce food.

Transportation links between the regions and advanced production techniques were possible because of the on-going revolution in technology and scientific discovery. The invention, in 1850, of the horse-drawn reaping machine made large-scale farming in the vast plains possible because it simplified the ages-old task of cutting wheat by hand. It would soon be followed by the steam-powered reaper and, later, the tractor and the combine. The transport of slaughtered meat across significant distances was possible because of the emergence of refrigerated railway cars after 1869 when George Hammond improvised refrigerated transport. Finally, in 1940, the self-propelled combine machine reduced harvesting time for one acre of wheat from 14 hours to 30 minutes. This sequence of inventions shaped the emergence of the mass-production and movement of huge amounts of food.

Other inventions and discoveries were more specific to the processing of food. In the early 1800s Nicolas Appert, a French chef, started the process of canning. That technique would be patented in the United States in 1815, and in 1847 the mass production of tin-plated steel cans would emerge. These canned goods were consumed by soldiers during the American Civil War (1861–1865), and the Union commissaries were freed from concerns about storage and safe supplies of food. In 1861 Louis Pasteur's discovery of the process of "pasteurization" was an important contribution to reliable food preservation. Food was heated to kill dangerous microbes and then sealed in an airtight container. In 1906 modern freeze-drying techniques were being used in France. Home refrigerators emerged in the United States in 1913, and in 1920 American Clarence Birdseye invented the process of deep-freezing foods. The Swiss invented instant coffee in 1937, which led to the future production of powdered food products. In 1973 the era of biotechnology began, when scientists demonstrated how genes could be split and merged to engineer superior products. The scientific contributions to the processing of food escalated as the industry evolved and helped raise the standard of safe food preservation to the point that food could be processed and even manufactured on a mass scale.

Also important to large-scale production of food intended for mass consumption was the evolution of the factory. As the site of bringing into play the efficient combination of labor and capital, factories emerged in the 1820s. They were substantially enhanced in the 1880s with the discovery of electricity. They refined the processes of production and instituted brand names for various foods that would enhance consumer demand. Food processing factories enjoyed a very high ratio of capital to labor. Companies opted to build plants of the greatest possible size in order to benefit from economies of scale and to minimize overhead costs. They created national and international advertising apparatus and retailing centers for the sale and distribution of groceries. This was especially important with meat processors, who required slaughterhouses and warehouses for the fast and efficient processing and sale of their perishable goods. These factories made use of the principles of mass production of the time: the division and specialization of labor and the use of standardized parts and processes. (In fact, the process also worked in reverse as Henry Ford is said to have been inspired to develop the automobile assembly line after visiting a Chicago exposition which featured the "disassembly line" of modern meatpacking.)

Other developments were necessary for the food processing industry to fit into mass production systems. Before the advent of large-scale factory processing and transport of food (which were both made possible by food preservation technology), individual growers and processors sold their products in local stores. In the early 1800s small manufacturers had appeared, but they were often without the capital to start larger factories which would yield greater profits. As the merger movement of the nineteenth and early twentieth century brought together the factors of production, many small-scale processors merged with others, forming the big conglomerates that would push the food processing industry into the powerful position it maintained throughout the twentieth century. Companies such as Quaker Oats (the result of a merger of three producers in 1901), General Mills (a 1928 merger), and Del Monte (a series of mergers beginning in 1899) built strong and long-lasting businesses out of small but reputable beginnings.

From its beginnings the industry was a concern for the U.S. government—not only in terms of safety regulations, but also in the area of research and development. The U.S. Department of Agriculture (USDA) was established under the Organic Act of 1862, which charged the commissioner "to collect new and valuable seeds and plants . . . and to distribute them among agriculturalists (sic)." The USDA would soon take on far broader authority such as meat inspection and the approval of certain chemical processes used in growing and producing foods. Food safety anxieties were first addressed in the Pure Foods Act and Meat Inspection Act of 1906. Those laws were the result of the exposé of the unsanitary practices in the Chicago meatpacking industry depicted in Upton Sinclair's novel, The Jungle. This issue of food safety and the public demand for government regulation of processed food became more pronounced throughout the twentieth century.

At the end of the century of boom for the food processing industry, consumers, governments, and consumer advocates also called for more accountability on the part of the industry. Food-borne disease reached an all-time worldwide high as people became increasingly concerned about the chemicals and processes used in food production. The United Kingdom, the European Union, and the United States called for higher measures of food inspection and safety. Nutritionists, wary of the industry's use of health trends to promote products, called for a definition of food terms in 1997. Under a decidedly skeptical eye, the industry would increasingly face the challenge of giving consumers more convenient and inexpensive food, while gaining public trust in a globally competitive market by ensuring real food safety and honest sales.

Food And Drug Act Of 1906 , Prior to 1906 the regulation of food production and commerce fell mainly on the state and local authorities. In the colonial period, the colonies fol… Food Poisoning , Food poisoning refers to an illness that is caused by the presence of bacteria , poisonous chemicals, or another kind of harmful compound in a food.… Travel , Travel TRAVEL. During the course of history, the impact of travel on the relationship between food and man has been manifold. Encounters with new foo… Intake , INTAKE INTAKE. Intake is an umbrella term that refers to the act of taking something in. The term "intake" is often used in relation to food and drin… Clarence Birdseye , Birdseye, Clarence Birdseye, Clarence (1886-1956) General Seafood Corporation Overview Billionaire scientist and inventor Clarence Birdseye was not t… INSPECTION , INSPECTION INSPECTION. Among the many systems that assure food safety, inspection is one of the most critical and difficult. As the global trade of f…