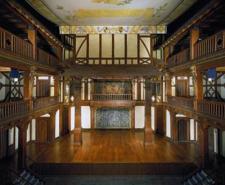 FOLGER SHAKESPEARE LIBRARY. The Folger Shakespeare Library, opened in 1932, houses the world's largest collection of Shakespearean manuscripts. Henry Clay Folger and his wife Emily Jordan Folger, both avid manuscript collectors, established the library as a repository for their collection that would be open to the American public. The Folgers chose Washington, D.C., as the place to house their collection. It took them nine years to purchase the property adjacent to the Library of Congress, one block from the U.S. capitol, and gain permission to build on it.

Henry Clay Folger, a lifelong Shakespeare collector and oil magnate (he worked for Standard Oil under John D. Rockefeller), left sufficient endowment to insure that the Folger Library and his collection would grow. Folger died two weeks after the cornerstone of the building was laid in June 1930. Emily Clay Folger presided at the opening in 1932. The library is now administered by Henry Folger's alma mater, Amherst College, as an institute of Amherst.

The collection of Shakespearean manuscripts at the library contains 229 Quarto editions of the plays and poems; 79 First Folios, 118 Second, Third, and Fourth Folios, and about 7,000 other editions of Shakespeare's works. In addition to its original Shakespeare collection, holdings now include the largest collection of pre-eighteenth century English books. The Library's Special Collections focus on the Renaissance period and include playbills, artworks, and other materials illustrative of the theater. It also holds strong collections of Early Protestant religious tracts and books of the Humanist period.

The Folger provides fellowships for a number of scholars each year to enable them to come to Washington and work daily in the Library's research rooms. In addition, the Folger sponsors several seminars each year taught by visiting faculty that are open to independent scholars and researchers. Free tours of the library are given to the public daily. As part of an extensive Education and Outreach Program, the Library sponsors free lectures and learning opportunities throughout the school year that are aimed at students from kindergarten to twelfth grade. The Folger also sponsors numerous exhibitions in its museum and gallery spaces. In 1970, the Folger made changes in its Shakespearean Theatre to allow it to sponsor a theater group and stage public performances. Additionally, the Folger supports readings by the PEN/ Faulkner winners and by noted poets, as well as concerts by the Folger Consort chamber music ensemble.

The Folger building houses the 250-seat Elizabethan theatre, the museum galleries, the magnificent reading rooms, and the library space. It has been featured in architectural magazines.

Manuscript , manuscript, a handwritten work as distinguished from printing. The oldest manuscripts, those found in Egyptian tombs, were written on papyrus; the ea… American Library Association , Renaissance libraries were important centers of learning and culture. More than just collections of books, they gave scholars a place to study langua… Catalog , catalog, descriptive list, on cards or in a book, of the contents of a library. Assurbanipal's library at Nineveh was cataloged on shelves of slate.… Library Of Congress , The Library of Congress, located in Washington, D.C., is the world's largest library, with nearly 110 million items in almost every language and form… Jose Toribio Medina , Medina, Jose Toribio Jose Toribio Medina (1852–1930) set out at the age of 22 to catalog the manuscripts and histories of his native Chile. Five year… Digital Libraries , The term "digital library" was coined relatively recently and is used to describe distributed access to collections of digital information. The terms…