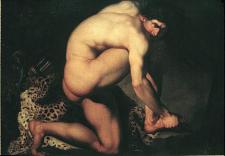 oxford
views updated
Philoctetes in Greek mythology, a famous archer, who by shooting Paris helped to bring about the fall of Troy. Although he had originally set out for Troy with the other Greeks, he had been bitten by a snake at Tenedos, and because of the smell of the suppurating wound that resulted he had been left by his companions on the desolate coast of Lesbos. After a prophecy that Troy would not fall without Philoctetes he was brought to the siege; his wound was healed and he killed Paris.