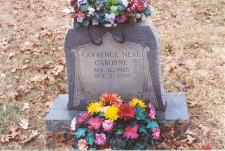 Larry Neal was one of the most influential figures of the Black Arts Movement, a cultural revolution of African-American art and artists active from the mid-1960s to the mid-1970s. In his 1968 essay “The Black Arts Movement,” Neal described Black Arts as, “… the aesthetic and spiritual sister of the Black Power concept. As such it envisions an art that speaks directly to the needs and aspirations of Black America.” This essay along with Black Fire: An Anthology of Afro-American Writing, the book he co-authored with Amiri Baraka (then known as LeRoi Jones), were two of the most definitive works on the Black Arts Movement. Neal also authored countless other articles and essays on the movement and its practitioners—artists, writers, musicians. However, throughout his extensive body of work ran one important theme—the celebration of black art, created for black people, by black artists. He hailed it as an art that stretched back to pre-colonial Africa, snaked through the slave songs of the deep South, rode upon the words of Malcolm X, and took flight on the jazz notes of black musicians. Neal reflected this ideology in his own work as a poet, playwright, editor, and scholar, and in doing so influenced a generation of African-American artists.

Lawrence Paul Neal was born on September 5, 1937, in Atlanta, Georgia, to Woodie and Maggie Neal, one of five sons. When Neal was a child, the family moved to Philadelphia, Pennsylvania, where he graduated from Roman Catholic High School. He went on to receive a dual degree in English and history from Pennsylvania’s Lincoln University in 1961. While a student there, he earned a prestigious creative writing award. According to the website of the Washington D.C. Commission on the Arts and Humanities, it was during this time that “He gained an appreciation for all aspects of black life, such as folk tales, slang, and street chants, and used them as sources of artistic expression.” He went on to take graduate courses in folklore at the University of Pennsylvania and earned a master’s degree in 1963.

After a brief teaching stint at Philadelphia’s Drexel Institute of Technology, Neal moved to New York City where he married Evelyn Rodgers, a chemist at Mount Sinai Hospital, in 1965. Neal worked briefly as a copywriter for the firm John Wiley and Sons before landing the position of arts editor at The Liberator, a black nationalist magazine. Neal soon found himself reviewing African-American cultural events and interviewing the most influential black artists, musicians, and writers of the day, putting him in a front row seat as the Black Arts Movement unfolded. Meanwhile, he had become increasingly involved in the black nationalist movements that were sweeping the country and was a member of both the Black Panther Party, where he served as education director, and the Revolutionary Action Movement.

that your ethics and aesthetics are one.” He was a major player in the 1964 founding of the Black Arts Repertory Theater and School in Harlem. Its mission was to bring art and the public together. In doing so, it staged plays, concerts, and poetry readings right on the streets of Harlem. Again, writing in “The Black Arts Movement,” Neal noted that they produced “plays that shattered the illusions of the American body politic and awakened black people to the meaning of their lives.” However, funding was hard to come by. Moreover, the “Establishment,” as Neal called the mainstream culture, opposed the theater. These two factors, combined with internal struggles, caused the theater to fold after just three months. Nonetheless, the Black Arts Repertory Theater and School was a success. Even as it shut its doors, dozens of similar groups across the country opened theirs. Neal also continued to write for both stage and screen. His play The Glorious Monster in the Bell of the Horn, set in post World War II Philadelphia, opened in July of 1979, and was described by a New York Times reviewer as having “a formidable beauty and wit.” Another of his stage works, In an Upstate Motel, premiered in 1981 at the bohemian St. Mark’s Playhouse in New York City.

In 1971 Neal and his wife adopted a son named Avatar and purchased a house in the Sugar Hill section of Harlem. Their home quickly became a center of cultural activity, playing host to Baraka, Ishmael Reed, Henry Dumas, Sonia Sanchez, and other prominent Black Movement artists. Meanwhile, Neal juggled a hefty schedule of writing. In addition to Black Fire, he wrote two well-received volumes of poetry—Black Boogaloo: Notes on Black Liberation in 1969 and Hoodoo Hollerin’ Bebop Ghosts in 1971. The former focused on the rift that occurred between African peoples and their ancestral beliefs, while the latter celebrated black folk culture and tales. In “The Black Arts Movement,” Neal had written, “Poems are physical entities: fists, daggers, airplane poems, and poems that shoot guns.” This can be said of both of his collections.

The prolific Neal also contributed articles to several African-American journals, including Black Theatre Magazine, Ebony, Negro Digest (later renamed Black World), and The Journal of Black Poetry. Along with Baraka, he founded Cricket, a short-lived magazine devoted to African-American music. Other publications which ran his work included the New York Times, Drama Review, and The Partisan Review. He wrote about cultural movements and the artists that fueled those movements, including people such as Charlie Parker, Ralph Ellison, and Zora Neale Hurston. Regarding Hurston, Neal wrote the introduction to the 1971 edition of her novel Jonah’s Gourd Vine and helped to publish her autobiography, Dust Tracks on a Road. Just prior to his death in 1981, he had written an introduction to a three-volume series of her work.

When not busy writing or researching articles, Neal worked as a professor, including stints at City College (now City University of New York) and Wesleyan University in Middleton, Connecticut. He also held a chair in humanities at Washington D.C.’s Howard University. From 1970 to 1975 he taught at Yale University. While there, he was awarded a prestigious Guggenheim Fellowship. After leaving Yale, Neal joined the Washington D.C. Commission on the Arts and Humanities as executive director. The position was the perfect embodiment of his Black Arts Movement sensibilities. The agency’s mission was to promote and support the development of arts in African-American communities. Though he left the organization in 1979, his legacy lives on in the Commission’s Larry Neal Writers’ Awards.

On January 6, 1981, while in Hamilton, New York, for a theater workshop at Colgate University, Neal suffered a massive heart attack. He was just 43 years old. At the time he was working with famed drummer Max Roach on an autobiography. He had just completed a series on jazz for Boston’s prestigious public television station, WGBH. He was also nearing completion on a book detailing the rise of the Black Arts Movement and Black Consciousness. With the help of his wife, the book was published posthumously in 1989 as Visions of a Liberated Future: Black Arts Movement Writings: Larry Neal. As he had been throughout his career, when Neal met death he was surrounded by the art movement that he had helped to define. Whether creating it, critiquing it, or chronicling it, Neal seemed always to be at the very heart of the Black Arts Movement. A reviewer of Black Fire had written in a 1968 edition of the Saturday Review that “[Neal and Jones had] set for themselves and their authors an enormous and revolutionary task: both to define a black esthetic and to illustrate scope and vitality.” Neal did more than accomplish that task; he lived it.

Washington D.C. Commission on the Arts and Humanities, http://dcarts.dc.gov/services/programs/neal.shtm

The writer Larry Neal, one of the most prominent figures of the black arts movement of the 1960s and 1970s, was born in Atlanta, graduated from Lincoln University in Pennsylvania in 1961, and received an M.A. from the University of Pennsylvania in 1963. He soon became one of the most prominent of the African-American writers that emerged in the early 1960s championing the search for a distinctive African-American aesthetic. His early articles, including "The Negro in the Theatre" (1964) and "Cultural Front" (1965), were among the earliest to assert that separate cultural forms are necessary in the development of black artists in a racist society.

Neal developed his perspective on black art in the influential anthology Black Fire (1968), coedited with Amiri Baraka, and the essay "The Black Arts Movement" (1968), which helped give a name and direction to the nascent artistic trend. Neal argued that the purpose of black arts was to effect a "radical reordering of the Western cultural aesthetic" in part through a purging of the external European and white American cultural influences from black artistic expression. His critical thinking was further developed in books such as Black Boogaloo: Notes on Black Liberation (1969), Trippin' a Need for Change (1969, coauthored with Amiri Baraka and journalist A. B. Spellman), and Hoodoo Hollerin Bebop Ghosts (1971). Neal also authored plays (The Glorious Monster in the Bell of the Horn, 1976), screenplays (Holler S.O.S., 1971; Moving on Up, 1973), and television scripts (Lenox Avenue Sunday, 1966; Deep River, 1967).

Neal was an instructor at the City College of New York from 1968 to 1969, and he subsequently taught at Wesleyan University (1969–1970) and Yale University (1970–1975). By the mid-1970s he was reconsidering his view of black culture. In "The Black Contribution to American Letters" (1976), he argued that while all African-American writers and literature must in some sense be political, it was important to separate the public persona of black writers from their specific private experiences, which are often wider and more inclusive than the polemical rejection of nonblack influences that characterized the black arts movement. Neal's later works include the play In an Upstate Motel, which premiered in New York in 1981. He died of a heart attack in Hamilton, New York, in 1981.

Martin, Reginald. "Total Life Is What We Want: The Progressive Stages of the New Black Aesthetic in Literature." South Atlantic Review (November 1986): 46–67.