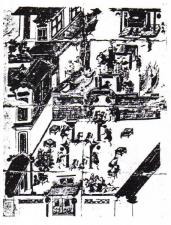 An ancient esoteric society of China. The candidate was taken to a dark room by two members to kneel before the president. He was given a living cock and a knife and took an oath to assist his brethren in any emergency, even at the risk of his life. He then cut off the head of the cock, mingled its blood with his own, and the three assisting individuals added some of their own blood.

After being warned that death is the punishment should he divulge the secrets of the society, he was initiated and given the triad signs of recognition. For example, a member had to lift any object with three fingers only. This society, originally altruistic, later became political.

Various Triad societies were revived in Hong Kong to operate criminal extortion and protection rackets. Cinema protection was a specialty of these gangs and usually involved Triad members being employed as ushers, ticket-sellers, or sub-managers.

Financial operations involve magic numerals, symbolic of the particular Triad society. For example, protection money may be demanded in sums relating to the figure 8, the lower half of the Chinese character Hung, used by some Triad societies. The numeral 3 denotes heaven, earth, and man. The word Triad originally was used as a mystical symbol.

In the 1970s, the Triad racketeering operations in Hong Kong resulted in the publication of a police manual, Triad Societies of Hong Kong, restricted to police personnel. In 1976, the Triad societies spread their operations to Britain, where cities like Birmingham, Bristol, Liverpool, Portsmouth, Southampton, Manchester, and London with large Chinese populations could be victimized. Triad protection rackets even operate in the West End cinemas and clubs of London, where vicious fights have been reported involving meat cleavers.

A muscleman in the Shing Wo Triad is known as "426," a numerical symbol for "Red stick" or "enforcer." In some British cities, the protection racket is being partially reduced by closing down illegal gambling clubs where Triad members meet or convert their funds.

Affluent Society , affluent society a society in which material wealth is widely distributed; often with allusion to the book of that title (1958) by the American econo… Tonton Macoutes , Tonton Macoutes (properly Tonton-Makout or Tontonmakout, sing. and pl.), a Haitian term that describes an old folktale character (Uncle Knapsack) who… Theosophical Society , The major modern organization advocating gnostic-esoteric teachings. The Theosophical Society was founded in New York in 1875 by Helena Petrovna Blav… Illuminati , A term first used in the fifteenth century by enthusiasts in the occult arts, signifying those who claimed to possess light directly communicated fro… Eugenics , Eugenics was defined in 1904 by Sir Francis Galton (1822–1911), who coined the word, as "the science which deals with all the influences that improve… Vedanta Societies , The first Vedanta society was established in New York City by Swami Vivekananda in 1894. In subsequent decades additional Vedanta societies were laun…