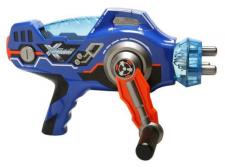 Pump-action water guns are a relatively recent addition to the water gun arsenal. Plastic squirt guns have long been a staple summer-time toy of American children. These traditional toys eject a relatively weak stream of water, requiring frequent breaks for refilling. The pump-action gun operates on a different principal from its predecessors. The user pumps a handle on the gun, which pressurizes air in a reservoir. When the user then operates a piston-like trigger, the pressurized air ejects water from a separate water tank, resulting in a strong stream of water that can reach as far as 50 ft (15 m). The original pump-action water gun was invented by an American engineer, Lonnie Johnson, and the toys are manufactured under the brand-name Super Soaker by the Larami Corporation of Mount Laurel, New Jersey. Despite the success of the Super Soaker, other companies have taken and expanded on the design.

Inventor Lonnie Johnson had a Master's degree in nuclear engineering and was working for the Air Force in 1982 when he came up with the idea of a pressurized squirt gun. He was actually working on a heat pump project that involved the use of water instead of Freon as a refrigeration fluid. While experimenting with some tubing in his bathroom, Johnson shot water through a high-pressure nozzle. He put the refrigeration work aside to make a prototype water gun, which he gave to his six-year-old daughter. The high-powered squirt gun quickly became the hit of the neighborhood, and the inventor began working on a marketable model. Johnson made all the valves and fittings for his water gun himself, and took out several patents to protect his rights. Manufacturing the water gun with his own resources proved to be too expensive, so Johnson marketed his idea to toy companies. It wasn't until 1989 that the inventor met with representatives of the Larami Corporation at that year's American International Toy Fair. Larami had previously marketed a battery-operated squirt gun that was patterned on the Israeli Uzi submachine gun. The battery-operated gun, invented by Alan Amron, went on the market in 1985 and was a big hit in 1986. This gun was powered by an interior motor which pumped out 250 squirts per minute. Due to Larami's water gun experience, it seemed a good candidate to make Johnson's toy. Johnson was wary of letting out the secret of his water gun's design, and at the toy conference he described his model in vague terms. He disclosed enough to get Larami's executives curious, and soon after, Johnson brought his prototype to the company's headquarters. His hand-built model was made of polyvinyl chloride (PVC) tubing, Plexiglas, and plastic soda bottles. To show the executives what the water gun could do, Johnson filled it and shot an immense stream of water all the way across the board room. Larami's president was immediately impressed, and Johnson and the company signed an agreement. The toy was almost instantly popular. Within two years of its introduction in 1990, Larami had sold over 10 million Super Soakers. With the larger models cost up to $40 dollars, it was a significant moneymaker.

Controversy erupted over the high-powered water guns in the summer of 1992. In Boston, a water fight escalated into a real gunfight, and one teenager was shot to death, causing Boston's mayor to ask local stores to stop stocking Super Soakers. Shortly after, in New York, teenagers drenched a passerby with a Super Soaker, and the offended victim answered with gunfire, wounding two youths. Politicians and law enforcement personnel faulted the Super Soaker in the wake of these tragedies, though others argued that it was real guns and not water guns that were the problem. Nevertheless, pump-action water guns grew in popularity. By 1998, Larami's Super Soaker was the top-selling summer toy in the world. Retail sales stood at over $200 million. The company had sold more than 300 million Super Soakers over eight years, and produced close to 10 models of varying size and price.

The prime raw material for water guns is simply plastic. The plastic is mixed with various pigments for colorful effects. Other materials needed are glue and light screws. The dies for the plastic molds are made of steel. Water is used in the manufacturing process, to test parts, as is pressurized air.

The manufacturing process for pump-action water guns is fairly simple, but the design process is lengthy and involved. The selling period for water guns is limited to summer. The design process usually begins in July or August, to create new models for next year's selling season. At that point, marketers usually have a clear idea of what models are selling well for the current year, and they can incorporate sales data and retailers' feedback into their plans for the next summer. Personnel at the water gun company begin their designs with a wish list, noting what features they would like to see improved or changed, and coming up with creative notions for the product. The company might also employ consultants or designers outside the corporation, to make sure it has access to fresh points of view. When the ideas have been hashed out for about six months, the water gun company enlists engineers to make a preliminary model. This first model is known as a "bread box." The bread box has the working features the water gun company has requested, but the nozzle and pump are fitted into a box looking little like the finished product. The features are evaluated for their performance only at this point; how the gun looks is another question entirely. The bread box may undergo alterations several times. Once it is approved by the company personnel working on the project, the engineers make drawings of the internal layout of the required parts.

Next, designers begin their work, making drawings of how they think the water gun should appear. The designers may make half a dozen to a dozen drawings. The company team reviews the drawings, and may mix and match aspects of different designs. For example they may prefer the handle on one design, and the nozzle on another. Designers make a final drawing based on the company team's preferences.

The model maker makes several models. The first one is not a working model but solid plastic. This allows the company team to see what the gun looks like in three dimensions. Then the team can judge the aesthetics of the new gun better. Next, the model maker produces a working model. Meanwhile, the art department at the company comes up with package designs and colors for the gun. The working model is made of a gray plastic. The model maker produces six of these, and the art department artists paint them to make them look like the toy that the company proposes to sell the next summer. These mock-ups are then distributed to top retail buyers. The buyers give their opinions on what they like or don't like about the product. They also begin to give the company estimates of how many their stores might want to stock.

After the water gun company has received feedback from the retailers, it begins working with its manufacturing contractor to get the new product ready for mass production. Yet another model is created, this time called a tooling model. This lets the experts in the factory see the parts they will need to mold, and they can point out any problems. At this stage, further work is done at the manufacturing plant.

Quality control starts at the beginning of the design process. As with all toys and products marketed to children in the United States, pump-action water guns must meet safety standards. These standards are set by the American Society for Testing and Materials (ASTM) and concern small parts, sharp points, safety of materials, and other aspects. Manufacturers are also concerned with the reliability of their product. An expensive, top-of-the-line water gun may be designed to last for 10 years, while a less expensive product is generally expected to last a year or two. This reliability is designed into the product, with a testing schedule laid out specifying the number of times the gun is expected to shoot. Just before the main production run, the manufacturer does a test run of 40-50 pieces for quality control purposes. These test pieces are subjected to a variety of trials such as drop tests, to see how well they hold up to both normal use and excessive abuse. If a model is supposed to last through 2,000 squirts, then the testing facility puts it through 2,000 squirts. Other pieces are tested to make sure no dangerous materials have been used in the making of the product, such as lead or heavy metals, and other safety factors are minutely examined. A large amount of quality control is also built into the manufacturing process. Key parts are tested individually before assembly, either with pressurized air or water. Random samples of fully assembled water guns are also taken. These are tested for function, meaning that they are filled with water and shot.

Pump-action water guns are being continuously redesigned to cater to the public's demand for bigger, larger water toys. There are many new designs that promise to meet this request. One new water gun will hold 1 gal (3.8 L) of water, have six settings for the nozzle, and three different spray patterns. Another will have 11 nozzle settings and hold 1.3 gal (4.8 L). The amount of soakage per second and length of spray are also a large factors in future design.

How Products Are Made Woodward, Angela

Woodward, Angela "Water Gun ." How Products Are Made . . Retrieved February 14, 2020 from Encyclopedia.com: https://www.encyclopedia.com/manufacturing/news-wires-white-papers-and-books/water-gun

oxford
views updated
water gun A marine seismic source which uses compressed air to drive a piston in order to evacuate a chamber flooded with water. The resulting water jet creates a vacuum in the surrounding water which implodes, causing an acoustic pulse. Since no bubbles are formed there is no bubble pulse, and consequently the short shot pulse provides higher resolution than can be attained with an airgun.