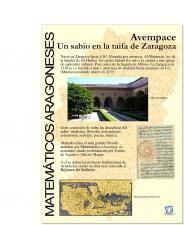 Abū-Bakr Muḥammad ibn Yaḥyā ibn al-Sāyigh ibn Bājja, the Islamic philosopher, was known to the medieval Scholastics as Avempace. He was born in Saragossa at the end of the fifth century AH, eleventh century CE, and died in Fez, Morocco, in 533 AH/1138 CE. During his brief life he endured the tribulations occasioned by the Christian "reconquest" of Andalusia. It is known that he wrote several commentaries on Aristotle's treatises and that he was very learned in medicine, mathematics, and astronomy. He was involved in the quarrel initiated by the Peripatetics, during which al-Bītrogī, whom the Scholastics called Alpetragius, distinguished himself. Ibn Bājja opposed his own hypotheses to Ptolemy's system.

Ibn Bājja's philosophical works have remained incomplete, notably the treatise that gained him his reputation, Tadbīr al-motawaḥḥid (The rule of the solitary). For a considerable length of time this treatise was known only through a detailed analysis of it in Hebrew by Moses of Narbonne (fourteenth century) in his commentary on the Ḥayy ibn Yaqẓān of Ibn Ṭufayl, the pupil of Ibn Bājja. Salomon Munk based his account of Ibn Bājja on this analysis. The Arabic original (now in the Bodleian Library at Oxford) was rediscovered by Miguel Asin Palacios.

The work's central theme is that of an itinerarium leading the man-spirit to unite itself with the Active Intellect (ʿAql faʿʿal, Intellegentia agens ). He who speaks of a "rule" or "discipline" assumes a mode of life regulated by actions demanding reflection, and this can be found only in the solitary man. This is why the solitary man's discipline should be the model for a member of the perfect City and the ideal State. The ideal State, it must be noted, is not the result of a priori conceptions, nor can it come into being by a political coup d'état; much more than a mere "social" reform, it is the fruit of a reform of customs that seeks to realize the fullness of human existence in each individual. For the time being, the solitary individuals live in imperfect states, with neither judge nor doctor except God. Their task is to become members of the perfect City. In order to found the regime of these individuals it is necessary at first to analyze and classify human actions, using the forms that they strive to fulfill as the point of departure.

For this reason the treatise is presented essentially as a "theory of spiritual forms," a sketch of the phenomenology of the spirit. The spirit progressively evolves from forms engaged in matter to forms that have been abstracted from it. Having then become intelligible in act, these forms thereby attain the level of intellect in act, reaching the level of pure spiritual forms, those forms that, inasmuch as they exist for the Active Intellect, have not had to pass from power to act.

Ibn Bājja imposed upon Islamic philosophy in Spain a completely different orientation than did Mohammad al-Ghazali. The motives of the solitary individual, of the stranger, and of the allogène, however, merge with the motives typical of the mystical gnosis in Islam. The same type of spiritual man is realized in these individuals, although their perception of the common goal differs and thereby the choice that determines their course. One of these courses in Spain was that of Ibn Masarra, which was continued by Ibn al-Arabi. Another was that of Ibn Bājja, later continued by Averroes.

Ibn Bājja's Tadbīr al-motawaḥḥid has been edited and translated into Spanish by Miguel Asin Palacios as Avempace, El régimen del solitario (Madrid and Granada, 1946); the first section has been translated into English by D. M. Dunlop in Journal of the Royal Asiatic Society (1945): 61–81.