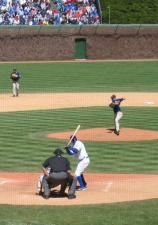 oxford
views updated
baseball National summer sport of the USA and Canada, also popular in the Japan, Korea, Taiwan, Latin America, Australia, and Europe. A baseball field comprises an inner diamond 27m (90ft) on each side, and an outfield. The diamond has a central pitcher's mound with bases at three corners. The batter stands at the fourth, home plate. Each team has nine players: pitcher, catcher, four infielders, and three outfielders. One run is scored every time a batter runs around all three bases and reaches home plate. To get back to home base with a single strike is a home run. A game is divided into nine innings (during which each team bats once): a team's innings ends when a third batter or runner is out, either by missing three consecutive valid pitches (strikes), by a field catch, or by not making it to the next base before a fielder throws the ball to the player on that base. Games tied at the end of nine innings are played until there is a winner. Every autumn the top teams of the two major leagues (American and National), including Canadian teams, compete in a best-of-seven ‘World Series’. The basic rules of baseball were compiled by Alexander J. Cartwright in 1845.