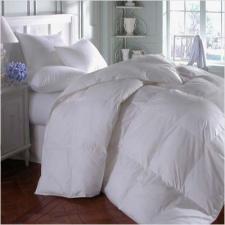 Lyocell is a manmade fiber derived from cellulose, better known in the United States under the brand name Tencel. Though it is related to rayon, another cellulosic fabric, lyocell is created by a solvent spinning technique, and the cellulose undergoes no significant chemical change. It is an extremely strong fabric with industrial uses such as in automotive filters, ropes, abrasive materials, bandages and protective suiting material. It is primarily found in the garment industry, particularly in women's clothing.

Fabrics derived from cellulose date back to the middle of the nineteenth century, though no one commercially produced one until 1889. A Swiss chemist, George Audemars, was granted an English patent in 1855 for an artificial silk he derived from mulberry bark. Audemars attempted to reproduce the method the silkworm uses for making silk by dissolving the fibrous inner bark of mulberry trees to separate out the cellulose. To form threads, he dipped needles into the cellulose solution and drew them out. Another chemist, Englishman Joseph W. Swan, modified Audemars' technique by forcing the cellulose solution through fine holes. His main interest was in producing filaments for electric lamps, but Swan realized that it was possible to manufacture a cellulose textile using his extrusion method. He exhibited cellulose fabric in London in 1885, but he failed to kindle any interest, and the project died out. Commercial production of a cellulosic fiber was first carried out by the French chemist Count Hilaire de Chardonnet. He exhibited his so-called artificial silk in Paris in 1889, and contrary to Swan's experience, people were thrilled by his new fabric. Chardonnet built a plant in Besancon, France in 1891, and had great success bringing his new fabric, now named rayon, to the forefront of the fashion industry. In the United States, rayon production began in 1910 under the auspices of the American Viscose Company. This company was an affiliate of Samuel Courtaulds and Co., Ltd., the forebear of the primary developer of lyocell, Courtaulds PLC of the United Kingdom (now known as Accordis Fibers).

Chemists and manufacturers were intensely interested in manmade fibers in the twentieth century. Acetate, another cellulosic fiber, was first commercially produced in the United States in 1924. Chemists at the Du Pont company developed nylon in the 1930s, and it came into wide commercial use beginning in 1939. Acrylic and polyester were two other significant man-made fibers. These debuted in the 1950s. Nylon, acrylic and polyester differ from cellulosic fibers because they are derived from chemicals, and thus are totally manmade. Lyocell, rayon and acetate are based on the cellulose in wood pulp, and so these are often designated "natural" fibers, though the fibers would not occur except for a manmade process.

The manufacturing and processing of artificial fibers underwent much refinement throughout the twentieth century. The first rayon produced by Count Chardonnet, for example, proved to be highly flammable, and the rayon on the market today is quite different. In the late 1970s and early 1980s, researchers, principally at the leading rayon producer Courtaulds Fibres and at an American firm American Enka, began investigating a new method of producing a cellulosic fiber through a solvent spinning technique. In this method, the cellulose is softened and then spun into fiber. Conventional rayon, by contrast, is called a "regenerated cellulose fiber," and it involves many more steps. The cellulose is first chemically converted into xanthate, then dissolved in caustic soda, then regenerated into cellulose as it is spun. The solvent spinning technique is both simpler and more environmentally sound, since it uses a non-toxic solvent chemical that is recycled in the manufacturing process. The solvent-spun cellulosic fiber lyocell was first produced commercially in the United States in 1992 by Courtaulds. The company used the brand name Tencel. The fabric was given the generic name lyocell in the United States in 1996. By this time, there was one other major lyocell producer in the world, the Austrian company Lenzing AG, which had acquired patents and research on lyocell from American Enka when it bought that company's rayon operation in 1992.

The main ingredient of lyocell is cellulose, a natural polymer found in the cells of all plants. It forms the basis for other plant-derived fibers such as cotton, hemp, and linen. The cellulose for lyocell manufacturing is derived from the pulp of hardwood trees. The pulp is typically from a mix of trees chosen for their cellulosic properties such as the color and amount of contaminants. Some common tree species used are oak and birch. The trees are grown on managed tree farms, generally on land that is not suitable for other agricultural uses. The solvent used in the manufacturing process is an amine oxide. Water is another key ingredient in producing lyocell fiber. A finishing agent is also used, and this varies, but is generally a lubricant such as soap or silicone. Lyocell fabrics are generally dyed with any dyes that are also compatible with cotton and rayon.

Recovery of the solvent

Lyocell is only produced at a few plants in the world. These are specially designed, state-of-the-art mills, and quality control is carried out by sophisticated computer monitoring systems. The computers continuously check a variety of key factors, such as the tenacity of the fiber, its color, the denier (a measurement of the fiber's diameter), elongation, moisture level, and level of the finish application. Computers also monitor for "trash" that results when one hole in the spinneret becomes blocked, and the filament comes out splintered or undrawn.

The manufacture of lyocell produces no harmful byproducts and is significantly less toxic and wasteful than the manufacture of other cellulosic fibers. Its principal ingredient, cellulose, is easily obtained from managed tree farms, and the industry has not been accused of poor forestry habits. The amine oxide solvent is non-toxic, and because it is almost completely recycled during manufacturing, it is not released into the environment. Lyocell fabrics are also naturally biodegradeable. Manufacturing lyocell is also environmentally sound because less water and energy is used than in the manufacture of other manmade fibers.

How Products Are Made Woodward, Angela

Woodward, Angela "Lyocell ." How Products Are Made . . Encyclopedia.com. (April 3, 2020). https://www.encyclopedia.com/manufacturing/news-wires-white-papers-and-books/lyocell

Woodward, Angela "Lyocell ." How Products Are Made . . Retrieved April 03, 2020 from Encyclopedia.com: https://www.encyclopedia.com/manufacturing/news-wires-white-papers-and-books/lyocell

ly·o·cell / ˈlīəˌsel/ • n. a strong synthetic fiber made from reconstituted cellulose, used in carpets and in apparel when blended with other fibers.

Teflon , Teflon Background Teflon is the registered trade name of the highly useful plastic material polytetrafluoroethylene (PTFE). PTFE is one of a class of… Raincoat , Background Raincoats are jackets made of fabric that is specially treated to repel water. In 1836, Charles Macintosh invented a method for combining… Baking Soda , Background Baking soda is a white crystalline powder (NaHCO3) better known to chemists as sodium bicarbonate, bicarbonate of soda, sodium hydrogen ca… Eraser , Eraser Background An eraser is a object that is used to remove marks from paper. Most erasers are designed to remove pencil marks. Other erasers are… Rubber Stamp , Background The rubber stamp has two faces, one serious and one full of fun. Practical use has been made of the rubber stamp for many years to apply o… Pickle , Pickle Background Pickles are cucumbers preserved in a solution of vinegar, salt, and other flavorings. They are typically fermented with naturally-o…