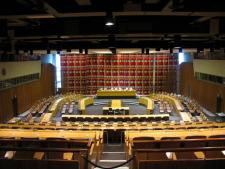 Economic and Social Council, constituent organ of the United Nations. It was established by the UN Charter and has 54 (18 before 1965) member nations elected for three-year terms (one third every year) by the General Assembly. The council's president and the four other members of its governing bureau, who set its agenda and organize its session, are elected annually. The council undertakes investigations of international economic and social questions and reports its conclusions and suggestions to the General Assembly and other organs of the United Nations for action. The council also coordinates the activities of the specialized agencies of the United Nations and arranges for consultations with international nongovernmental organizations. The full council meets annually; decisions are taken by a majority of members present and voting, which insures a majority of developing nations. The council has established functional commissions, including the Statistical Commission, the Commission on Narcotic Drugs, the Commission for Sustainable Development, the Commission on the Status of Women, and the Population and Development Commission, and regional commissions. A director-general directly below the UN secretary-general has been created to coordinate programs under the council. The activities of the former Commission on Human Rights (superseded by the UN Human Rights Council in 2006) were particularly important. In Aug., 1948, a draft of a Universal Declaration of Human Rights, drawn up by the commission, was adopted by the General Assembly. In 1967, the commission was authorized to investigate and monitor violations of human rights in both developed and developing countries. The Economic and Social Council supervises the activities of the United Nations Children's Fund, the Office of the United Nations High Commissioner for Refugees, the United Nations Development Program, and the International Narcotics Control Board, and it has consultative relationships with numerous nongovernmental organizations. It also undertakes special studies at the request of countries belonging to the United Nations.

Second Council Of Nicaea , Skip to main content Second Council of Nicaea United Nations Security Council , The United Nations was created at the end of World War II. That war cost the lives of millions of people, some in battle, many others as a result of… Council Of Basel , Basel, Council of An ecumenical council announced in Siena on Feb. 19, 1423, and convoked at Basel, Switzerland, by Martin V on Feb. 1, 1431, and aft… Ncvq , NCVQ n. (in the UK) National Council for Vocational Qualifications: a body set up by the government to achieve a coherent national framework for voca… European Union , The European Union (EU) is a grouping of states from Western, Eastern, and Central Europe. Those interested in politics view the EU with great intere… United Nations , Type of Government The United Nations (UN) is the world’s primary agency for the promotion of peace, global development, and international cooperatio…