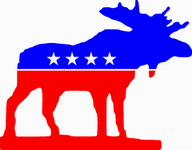 BULL MOOSE PARTY, the nickname given by newspapers to the Progressive Party, founded in June 1912 by progressive Republicans who bolted the GOP convention to protest the regular party's "standpatism" and the usurpation of progressive presidential electors by incumbent William Howard Taft. The "Bull Moose" tag was an obvious reference to Theodore Roosevelt, the party's leader and presidential candidate, who sometimes identified himself with the male gender of the North American ruminant. When shot by a would-be assassin only weeks before the 1912 election, Roosevelt insisted on immediately filling a speaking engagement, saying "it takes more than that to kill a bull moose."

The 1912 Progressive platform supported measures including a minimum wage, workers' compensation, and women's suffrage. It advocated "a contract with the people," with government acting to improve social and economic

conditions. Many people considered the party's aims socialistic. Despite an electrifying campaign, during which Roosevelt trumpeted his New Nationalism, his candidacy split the Republican vote and arguably contributed to Woodrow Wilson's victory. Roosevelt placed second, polling 27.4 percent of the popular vote, the highest percentage ever by a third-party candidate Over the next two years, party leaders worked to build their organization, but the midterm elections proved disappointing. Wilson had stolen much of the Progressive Party's thunder, and voters were tiring of reform. In 1916, the party was largely reabsorbed into the Republican fold. During its short lifetime, however, the Bull Moose Party was a center for progressive political thinking and is credited with influencing the enactment of Wilson's own reform agenda.