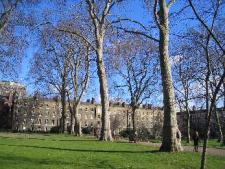 oxford
views updated
Gray's Inn one of the Inns of Court in London, originating in the late 13th century with those who came to study law under Reginald de Grey of Wilton; his manor house, just outside the City of London, became the first hostel of the society. The precise date at which the Honourable Society of Gray's Inn was founded is not known, but by the 16th century it was well established, with such notable members as William Cecil, Lord Burleigh, and Francis Walsingham.