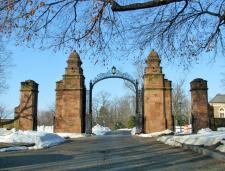 MOUNT HOLYOKE COLLEGE. Located in South Hadley, Massachusetts, Mount Holyoke College is the oldest institution of higher education for women in the United States never to have closed its doors and the first of the "Seven Sister" liberal arts schools. Founded as Mount Holyoke Female Seminary by Mary Lyon in 1837 to produce well-qualified teachers, the institution initially met some opposition from those who subscribed to the prevailing view that women were constitutionally unfit to withstand the mental and physical demands of higher education. Lyon countered by promoting women's education as the means by which women might best fulfill their responsibilities to furnish good citizens to the nation. After marshalling public support for the school, Lyon wanted to guarantee Mount Holyoke's financial stability and was determined not to leave the college dependent on a small base of wealthy donors. By soliciting small donations from a large number of New England women, she made Mount Holyoke the first privately endowed school for women in the United States. A permanent endowment allowed the school to offer quality education to the daughters of the middle class at a cost within their means.

With an enrollment of eighty, Mount Holyoke Female Seminary officially opened on 8 November 1837. It followed a three-year curriculum and embodied major innovations in female education by instituting rigorous academic entrance requirements and a curriculum free of instruction in domestic pursuits. Patterned more after the colleges than the contemporary female seminaries, Mount Holyoke gave generous place to the sciences, including Lyon's specialty of chemistry.

Upon Lyon's death in 1849, the school continued to flourish. In 1861, as Lyon had planned, a four-year course of study was instituted. In 1888, the institution obtained collegiate status and the seminary curriculum began to be phased out. The school formally became Mount Holyoke College in 1893. Mary Emma Woolley, a noted advocate for international women's rights, served as president for thirty-seven years beginning in 1900.

Through the years, no other institution has been as closely associated with women missionaries. The success of Mount Holyoke students in organizing and teaching in mission schools, and in garnering support from women at home, figured importantly in the explosion of American Protestant influence around the world. At the start of the twenty-first century, approximately 2,000 students took classes at the 800-acre campus. Mount Holyoke alumnae include Emily Dickinson, poet; Frances Perkins, the first woman to serve in a presidential cabinet; Virginia Apgar, a physician who developed a score for evaluating newborns; and Wendy Wasserstein, a Pulitzer Prize–winning playwright.