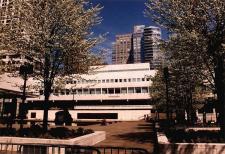 oxford
views updated
Juilliard School. Amer. mus. coll. in NY. Named after Augustus D. Juilliard (b at sea, 1836; d NY, 1919), NY cotton merchant, who left around 20 million dollars for creation of Juilliard Musical Foundation, 1920. School founded as Juilliard Graduate Sch. 1924, entrance only by competitive exam. before entire faculty, each student having to re-qualify in this manner every year of their course. Merged with Inst. of Mus. Art (founded by F. Damrosch and J. Loeb in 1905) in 1946, the Inst. becoming the Undergraduate Sch. of the Juilliard, with Graduate Sch. retaining orig. identity. The composer William Schuman was pres. 1945–62, Peter Mennin 1962–83, Joseph W. Polisi from 1984. In Nov. 1969 the Sch. moved to its own building as a constituent part of the Lincoln Center for the Performing Arts. This building has 4 auditoria, incl. opera th. Name changed from Juilliard School of Mus. to Juilliard Sch. because of est. of dance dept. in 1952 and drama division in 1968.

The Jazz Singer
The Jayhawks
The Interpublic Group of Companies Inc
the Internet
The Indo-European Family of Languages
The Illuminati
The Hoover Company
The Home Depot Inc
The Hockey Company
The Hertz Corp
the Hebrides
The Hearst Corp
The Hartz Mountain Corp
The Great Society
The Great Atlantic & Pacific Tea Company, Inc.
The Grateful Dead
The Grapes of Wrath
the Grampians
The Gorman-Rupp Company
The Goodyear Tire & Rubber Company
The Goo Goo Dolls
The Golden Legend
The Gipsy Kings
The Gillette Company
The Gap Inc
The Juilliard School
The Killers
The Klezmatics
The Kroger Company
The Kronos Quartet
The Lady of Shalott
The League of Nations
The Legend of the Invisible City of Kitezh
The Limited Inc
The Lonely Crowd
The Longaberger Company
The Lubrizol Corp
The Manhattan Transfer
The Marmon Group
The Matrix
The Mavericks
The May Department Stores Company
The McGraw-Hill Companies Inc
The Mead Corp
The Mekons
The Mens Wearhouse Inc
The Meters
The Misfits
The National Park of American Samoa
The New Republic
The New York Times