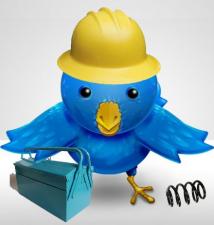 Stanley Kubrick’s science-fiction film 2001: A Space Odyssey (1968) opens with a scene of early hominids hammering with bones, depicting primitive tool use. While we might consider human tool use as beginning with stones shaped by man for specific tasks, it is likely that found objects such as sticks, stones, and bones were used much earlier than this. With the advent of tools being intentionally formed for specific tasks, tools not only assisted, but also represented, particular ways of doing things. In other words, the design of a tool reflects an understanding of how to use that tool and what effect using it can make on the world.

Broadly speaking, a tool is some object that extends the abilities of its user. Thus, a tool might be an object held by an animal’s claws or mouth that extends the animal’s ability to reach, hit, and so on. This extension is also a change in the animal’s movement and activity. It is interesting to note that tool use occurs in so few species; that is, it is the exception rather than the norm in animal behavior. The problem with defining tool use is that often there is little need to assume that the animal has a purpose in mind—it is perfectly feasible to assume that the animal is exhibiting a stereotyped pattern of behavior that is common across the species, or in other words, the animal has little choice but to act in this manner. As Benjamin Beck points out in Animal Tool Use: The Use and Manufacture of Tools by Animals (1980), it can be difficult to separate tool use from the myriad other activities that animals perform.

An obvious route around this dilemma is to consider the manner in which objects might be used to solve problems. One cannot write about tool use without mentioning the work of Wolfgang Köhler and his studies of captive chimpanzees. His studies are interesting for introducing Einsicht (“insight”) into the psychological literature. In his work, the chimpanzees were confronted with problems, for example, a piece of fruit was placed just out of reach and the chimpanzee was given two sticks. Köhler’s thesis was that, after a period of confusion, the chimpanzee had a sudden realization (or “insight”) that joining the two sticks would allow him to reach the fruit. However, subsequent research suggested that a chimpanzee, given two sticks, will spontaneously attempt to join them, as part of exploring and playing with them. Thus, it is not clear whether the “insight” led the chimpanzee to decide to join the two sticks, or whether joining two sticks provided him with a longer stick that he recognized could reach the fruit. On the one hand, if “insight” was at work, then one could assume that the chimpanzee spent some time mulling over the problem until realizing a solution—that is, viewing the solution to the problem as requiring cognitive activity. On the other hand, the physical activity of joining two sticks (because it was possible) could lead to the creation of a new object, which could have new properties that the chimpanzee could recognize. This seems to raise questions of perceiving the affordance of objects (in the manner suggested by J. J. Gibson) rather than requiring representation of a model.

There has been growing evidence from the neuropsychological community that images of objects that support grasping evoke different neural responses from other images (in both humans and apes). This suggests that the brain responds to objects that afford particular responses, such as grasping. Research from patients with apraxia (disorders of movement) suggests that objects are coded in terms of their appearance and also in terms of the sequence of actions performed with an object—lesions in specific cortical regions can impair one or another of these codings. An implication of this is that an object can be recognized as supporting a particular activity (e.g., a shoe or a stone can serve as a hammer), and that practicing the use of the object can create coordinative structures for expert performance (e.g., comparing an experienced carpenter with a novice sawing a piece of wood). This suggests that the use of tools is a complex combination of psychomotor skill with cognitive abilities to recognize objects as potential tools and to determine sequences of use of these objects.

Research on the forming of stone tools by early hominids often divides between theorists who suggest that the tools were being made to a template or model and those (more recently) who suggest that the tools could be fashioned by reacting to the appearance of the object as it was being shaped. This would be an extreme version of stone-tool creation in which the process of hammering the stone to produce a “tool” was repeated until something approaching a useful tool was produced. However, many surviving stone tools not only exhibit similar shapes, but also tend to exploit the properties of the stones being worked. This suggests that even if the toolmaker did not have a “template” of the final product, the activity was responsive to the gradually changing nature of the stone being worked. This suggests that the toolmaker was sufficiently dextrous to work the stone, and capable of recognizing the affordance of the stone as it was being worked. Consequently, rather than setting out to make a specific tool, the toolmaker might have selected a stone that would potentially yield a tool (thus, needing to recognize in an object not only the potential to be used as a tool, but also the potential to be worked into a tool) before beginning the process of working the stone. As this process unfolded, imperfections in the stone might result in unanticipated fractures that would cause the toolmaker to either abandon the stone or to modify the shape being worked. What is clear from analysis of early stone tools is that different tools were used for different purposes (often, collections of several different tools have been found on a site, implying the existence of a “tool kit” to support different activities).

If we accept that a tool, in any form, represents an extension of the user’s abilities, cognitive tools can also be used to replace or at least redefine these abilities. What is interesting is that the substitution is not simply a matter of one set of activities replacing another, for example, a calculator replacing the ability to perform mental arithmetic by the ability to enter numbers on a keypad. Rather, the tool itself represents the problem that one is trying to solve, together with the manner in which to solve it. Thus, the calculator buttons invite entering numbers, even when the sum can be more quickly performed mentally. The conclusion is that a tool is not only a physical object but also the embodiment of the solution to a problem, and it also suggests the best way to approach activity.

Baber, Christopher. 2005. Cognition and Tool Use: Forms of Engagement in Animal and Human Tool Use. London: Taylor and Francis.

Beck, Benjamin B. 1980. Animal Tool Use: The Use and Manufacture of Tools by Animals. New York: Garland.

oxford
views updated
tools In archaeology, objects used by early people to assist them to shape their environment. The first tools were probably unshaped stones, sticks or bones. The techniques used for sharpening flints, in particular, are used to distinguish early cultures. Metal was originally introduced for ornament, with native copper the first metal to be worked, c.6000 bc.

The Black & Decker Corp. , 701 East Joppa Road Towson, Maryland 21286-5559 U.S.A. Telephone: (410) 716-3900 Fax: (410) 716-2933 Web site: http://www.bdk.com Public Company Inco… Eolithic , E·o·lith·ic / ˌēəˈli[unvoicedth]ik/ • adj. dated Archaeol. of, relating to, or denoting a period at the beginning of the Stone Age, preceding the Pal… Sandvik Ab , Sandvik AB SE-811 81 Sandviken, Sweden Telephone: (26) 26 00 00 Fax: (26) 26 10 22 Web site: http://www.sandvik.com Public Company Incorporated: 1868… Tool Use , Tool Use Until quite recently, tool use was considered to be a uniquely human behavior. Early anthropologists taught that the use of tools was limite… Whirlpool , whirl·pool / ˈ(h)wərlˌpoōl/ • n. a rapidly rotating mass of water in a river or sea into which objects may be drawn, typically caused by the meeting… Stone Age , Stone Age Period of human evolution defined by the use of stone tools. The Stone Age dates from the earliest identifiable broken-pebble tools made by…