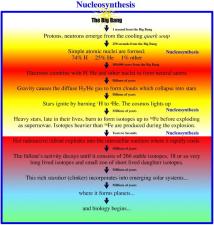 oxford
views updated
nucleosynthesis The process by which elements are formed. Modern theories suggest that nucleosynthesis is intimately linked with the stages in the life-cycle of stars (stellar evolution), and that, commencing with hydrogen, heavier elements are created by nuclear fusion of lighter nuclides at the temperatures and pressures existing in the cores of stars. Because the lighter elements are consumed to produce energy these thermonuclear reactions are referred to as ‘burning’, although they have nothing to do with combustion. The stages of stellar evolution conform well with the overall pattern of peaks and troughs in the cosmic abundance of elements in order of increasing atomic number (Z). During the first and longest (main-sequence) phase, hydrogen (which is by far the most abundant element of the stellar material) is consumed to produce helium (hydrogen burning). Hydrogen burning is followed in turn by helium burning, carbon and oxygen burning, and silicon burning, each phase producing heavier elements from lighter ones. The heaviest elements are formed in the last stages in the sequence: the equilibrium (e) process (coinciding with the ‘iron peak’ elements, Cr, Mn, Fe, Co, and Ni), followed by the ‘slow neutron (s) process producing elements up to Bi (atomic number 83), and finally (in supernova events) the rapid neutron (r) process producing elements with atomic number greater than 83. See also PROTOSTAR.

Nutrient Cycle , nutrient cycle(mineral cycle) A biogeochemical cycle, in which inorganic nutrients move through the soil, living organisms, air, and water, or throug… Krebs Cycle , The Krebs cycle is a set of biochemical reactions that occur in the mitochondria. The Krebs cycle is the final common pathway for the oxidation of fo… Core (geology) , Sun (Stellar Structure) The Sun is the star about which Earth revolves. A typical star, Earth's sun is composed of gases and heavier elements compres… Glyoxylate Cycle , glyoxylate cycle A metabolic pathway in plants and microorganisms that is a modified form of the Krebs cycle. It utilizes fats as a source of carbon… Sedimentary Cycle , Skip to main content sedimentary cycle sedimentary cycle A cycle which comprises the weathering of an existing rock, followed by the erosion of miner… Oestrus Cycle , oestrous cycle (sexual cycle) The cycle of reproductive activity shown by most sexually mature nonpregnant female mammals except most primates (compa…