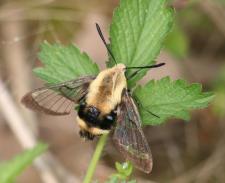 bee moth, greater wax moth, or honeycomb moth, common name for an insect pest of honeycombs. Bee moths do damage during their larval stages, injuring combs and honey. The moth Galleria mellonella belongs to the subfamily Galleriinae of the family Pyralidae, in which the females characteristically lay their eggs in beehives. The adult moths have brownish front wings with wing-spans of about 1 in. (2.5 cm). Eggs are laid in masses in the crevices of the hive. The newly hatched larvae tunnel into the combs, leaving a complex of silken galleries behind; they also puncture the wax caps of honey cells causing honey leakage and making the punctured comb honey unmarketable. Normally, the moths attack only abandoned beehives, or active ones in which the bee colony has been weakened, e.g., as a result of disease or starvation. Another well-known but smaller member of the subfamily is the lesser wax moth, Achroia grisella, which has the same type of scavenging habits as the greater wax moth. Bee moths are classified in the phylum Arthropoda, class Insecta, order Lepidoptera, family Pyralidae, subfamily Galleriidae.

Exopterygote , exopterygote Any winged insect showing hemimetabolous development, i.e. the eggs hatch into young (called nymphs) that resemble the adults but lack w… Encyclopedia.com. , yolk / yōk/ • n. the yellow internal part of a bird's egg, which is surrounded by the white, is rich in protein and fat, and nourishes the developing… Wing , wing / wing/ • n. 1. any of a number of specialized paired appendages that enable some animals to fly, in particular: ∎ (in a bird) a modified foreli… Mantid , mantid or mantis, name applied to the large, slender, slow-moving, winged insects of the family Mantidae in the order Mantodea. Predatory insects, ma… Reproduction , An essential attribute of any species or population is the ability to produce a succeeding generation. As the first vertebrates to set foot on land,… Cricket , Crickets (order Orthoptera, family Grillidae) are found throughout the world except for the polar regions. More than 900 species have been described.…