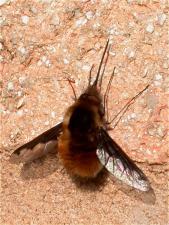 oxford
views updated
Bombyliidae (bee-flies; order Diptera, suborder Brachycera) Family of flies, most of which are medium to large, with densely pubescent bodies and slender legs. The proboscis is elongate, points forward, and is adapted for feeding on nectar from flowers with long corollas. The third antennal segment is simple, with the style small or absent. Their common name refers to their appearance and adult behaviour, and to their larvae which are parasitic upon bees and wasps, although some species have larvae which parasitize other insects. Eggs are laid near the entrance to the nest of the specific bee host parasitized by that species of bee-fly. The tiny larvae enter the nest and usually wait until the bee larva has pupated before metamorphosing from a small, mobile animal to a smooth, fat larva which feeds on the bee pupa. The bee-fly pupa is dual-phased. The first pupa is ‘normal’; the second stage has a sharp battering ram with which to break down the nest cell wall, made by the adult bee when closing the cell. The adult bee-fly emerges once the second stage pupa has ruptured the seal. More than 2000 species of bee-flies have been described.

Ichneumon Fly , ichneumon fly Parasitic insect that attacks other insects and spiders. Found worldwide, they are characterized by an ovipositor that is often longer… Fruit Fly , fruit fly • n. a small fly (families Drosophilidae and Tephritidae) that feeds on fruit in both its adult and larval stages. fruit fly See Drosophila… Flies , Skip to main content Flies Flies Flies belong to the order Diptera, a group that also includes mosquitoes, gnats, and midges. Flies make up the fourt… Crane Fly , crane fly True fly of the order Diptera. It has a slender body, long fragile legs, and one pair of wings. The hindwings are reduced to special balanc… Snakeflies , Snakeflies Snakeflies are insects in the family Raphidiidae, in the order Neuroptera, which also contains the closely related alderflies (Sialidae) a… Black Fly , Skip to main content black fly black fly, name for any of the flies of the family Simuliidae. The black fly is about 1/8 in. (3.2 mm) long and has la…