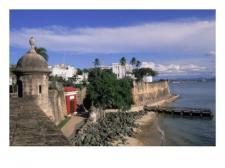 oxford
views updated
San Juan Capital, largest city, and major port of Puerto Rico, on the ne coast of the island. It has one of the finest harbours in the West Indies. Founded in 1508, the port prospered during the 18th and 19th centuries, and was captured (1898) by the USA during the Spanish-American War. The city is the commercial and financial centre of Puerto Rico. Exports: coffee, tobacco, fruit, sugar. Industries: cigars and cigarettes, sugar refining, rum distilling, metal products, pharmaceuticals, tourism. Pop. (2000) 421,958.