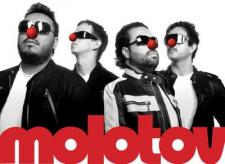 The Mexican rap-metal quartet Molotov, like the bomb of the same name, burst onto the Spanish-language rock scene in the mid-1990s with an explosive mix of hard-driving rock, rapid-fire rap, funk, and traditional Mexican influences, combined with controversial, politicized Spanish, English, and "Spanglish" lyrics that targeted corruption and social injustice. Embraced by young Mexicans at a time of political upheaval, the Mexican establishment denounced their music in Business Week, as "harmful and offensive trash." The band was also maligned by detractors abroad—Spanish gay groups accused the band of homophobia, and the government of El Salvador barred Molotov's entry into the country on the pretext, quoted by the EFE News Service, that its presence could prove "inadecuado 'para la salud mental' de los salvadoreños" (harmful to the mental health of the Salvadoran population).

The band's rise to commercial fame was explosive, moving from the Mexico City underground to a recording contract little more than a year after its inception in September of 1995. Molotov started as a short-lived quartet: Micky "Huidos" Huidobro, Tito Fuentes, Iván Jared (aka La Quesadillera, who left the group on October 10, 1995), and Javier de la Cueva (who left on February 16, 1995). By February of 1996, when the band started playing Mexico City dives, Molotov had established its current lineup: Huidobro, Fuentes, Paco Ayala, Randy "el gringo loco" Ebright, an American immigrant and son of a DEA agent who'd moved to Mexico as a teenager.

The band quickly developed a core audience on the Mexico City underground club circuit, and were soon invited to open for bigger-name groups like the Spanish rock band Heroes del Silencio and Mexican acts like La Lupita and La Cuca. Their big break, however, came at a concert opening for the Argentine pop group Illya Kuryaki and the Valderramas, where representatives from Universal Music Latino saw them and offered them a contract. The group began recording in February of 1997.

Molotov's debut album, ¿Donde Jugarán las Niñas? (Where will the girls play?) that same year brought instant controversy. Sexually uninhibited and politically scathing, the album was banned by Mexican radio stations and record stores. The band sold its records on the streets, eventually catching the attention of both the public and critics. The band's politicized lyrics found a sympathetic reception at a politically charged time in Mexican history; the southern state of Chiapas had seen the recent uprising of the Zapatista National Liberation Army (EZLN) and millions were captivated by its charismatic spokesman, Subcomandante Marcos. Antipathy toward the Institutional Revolutionary Party (PRI), which had ruled Mexico for more than 70 years, was growing. "Corruption is a fact of life, and so is disillusionment," stated Business Week in an article about the band and its political significance. With songs like "Gimme tha Power" and "Voto Latino" (Latin vote) Molotov went for the jugular and attacked the government directly. Despite attempts to silence them, Molotov sold more than 400,000 albums in Mexico and quickly moved into the mainstream.

In 1998 the album earned a Grammy nomination for Best Latin Rock-Alternative Performance, fitting nicely in a new American niche for Spanish-language rock groups, rock en español. New York radio personality Howard Stern began using Molotov's music on his program, and American teens shouted Spanish expletives along with the band at Molotov concerts. By the end of 1998, the album had sold more than 800,000 units worldwide, going platinum in Chile and the United States, and double platinum in Spain. Molotov's Spanish concerts were picketed by gay groups protesting one of the songs on the album, Puto which they claimed was homophobic (a charge the band denied). That same year, the band released a remix collection called Molomix, which it promoted in the United States.

In 1999 the group released an album of entirely new material. Apocalyps**t, produced by Mario Caldato, Jr., who'd also worked with the Beastie Boys. Despite such high-profile help, the album failed to resonate with fans and enjoyed only moderate success. The Molotovs toured the United States as part of the Vans Warped Tour in 1999 and the Watcha Tour, which featured Latin American alternative rock bands, in 2001. The group kept a low profile during the next couple of years, but did collaborate on projects such as a Spanish-language tribute to Queen, an homage to the Mexican band Los Tigres del Norte, and the soundtrack for the Mexican film Y tu mamá también.

In 2003 Molotov once again grabbed attention on both sides of the border with the album Dance & Dense Denso which, in Spanish can roughly translate to "dance and hit yourselves good." According to the Houston Chronicle, "the mosh pit reference is appropriate because the group's searing guitar riffs, pounding drums and loud vocals are as aggressive as ever. But with highhat beats and electric-piano touches, Molotov can instigate hip-shaking as well as head-banging."

The controversial song "Frijolero" ("beaner," a derogatory term for Mexicans) unleashed a cross-border volley of racial epithets at both Mexicans and gringos. The Village Voice called the track "a languid, Old West–inspired polka-cumbia" that featured Ayala rapping in Spanish with an affected American accent and Ebright according to the Houston Chronicle, "[drawling] his rhymes like a rapping Harry Connick Jr." Interestingly, the video that ran on MTV en Español censored the Spanish-language expletives, but let those in English stand. The video, which also attacked American foreign policy, portrayed falling bombs and Presidents George W. Bush and Vicente Fox dancing with the devil, but the attack wasn't personal, Ayala insisted to El Universal. "No somos anti yankis, somos anti ideologyía del presidente George W. Bush. La gente entendió bien allí el tema del 'Frijolero.'" (We're not anti-Yankee, we're just against the ideology of President George W. Bush. The people up there knew what 'Frijolero' was all about.) [Translation by the author.]

Their songs have a lighter side, too, Huidobro told La Prensa San Diego. "We don't want to write solely about social issues or only about politics, because we'd then become bored with ourselves. We also like to drink, we like girls, so we also write songs about those topics." The song "Changuich a la chichona," for example, compares snack foods and female anatomy.

In 2003, after touring Europe and the United States, the band won four MTV Latin Awards: Video of the Year, Best Group or Duo, Alternative Artist, and Best Mexican Artist, and a Latin Grammy Best Video award for "Frijolero."

Prodigy , Prodigy Electronica band Sources With the release of their beat-driven, high-energy single “Firestarter” in 1996, U.K. dance act Prodigy grabbed Amer… Weezer , Weezer Weezer Weezer Rock band The early nineties rock world enamored with long dirty hair, angst-ridden screeching, and power chord riffage, the Los… La Ley , Rock group The world of rock español took a highbrow turn with the evolution of a Chilean ensemble called La Ley in the late 1980s. This group (whose… Alejandra Guzman , Guzmán, Alejandra: 1968—: Rock Singer, Songwriter She's been called the Mexican Madonna and the bad girl of Latin pop. Mexican rock star Alejandra Gu… Lalo Guerrero , Eduardo "Lalo" Guerrero Jr. (1916–2005) is known as the father of Chicano music. His career began in the 1930s and continued on until his death in 20… Rage Against The Machine , Rage Against the Machine Rage Against the Machine Rock/rap group Greek philosopher Plato once wrote, “The introduction of a new kind of music must be…