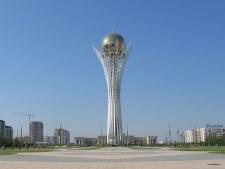 oxford
views updated
Astana (formerly Aqmola) Capital-designate of Kazakstan, on the River Ishim in the steppes of n central Kazakstan. Under Soviet rule, Aqmola functioned as capital of the Virgin Lands. From 1961 to 1993 it was known as Tselinograd; from 1993 to 1998 as Aqmola. Pop. (1999 est.) 280,500.