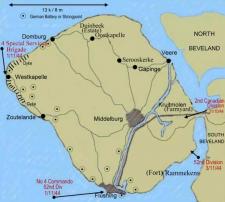 oxford
views updated
Walcheren landing, 1809. Britain did not find it easy to wage war against Napoleonic Europe. Despite the catastrophic failure of the landing in Holland in 1799, the British government resolved in 1809 to try again, using troops recently withdrawn from Portugal. The object was to capture Walcheren, the island on which Flushing stands, menace Antwerp, and encourage the Dutch to rise against the French. Lord Chatham commanded 40,000 men, with Sir Richard Strachan in charge of a very large fleet. There was no element of surprise, French resistance was fierce, the commanders quarrelled, and the army was decimated by dysentery and fever. Some 106 men died in action, 4,000 from disease. The enterprise was abandoned.