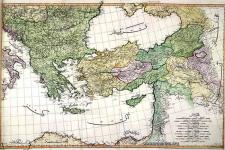 The oldest and largest district of Asian Istanbul.

Situated across the Bosporus from the walled city of Constantinople, Üsküdar was called Chrysopolis in ancient times and Scutari in the Byzantine era. In the period of Ottoman rule, Üsküdar became more integrated into the life of the capital city, as it became the center of several dervish orders and tekkes, military barracks, and, in the nineteenth century, textile and other factories. In the 1860s, it was formally incorporated into the municipal government of Constantinople (now Istanbul). It was in Üsküdar that Florence Nightingale set up her famed hospital during the Crimean War (1853–1856). And in the late nineteenth century, Russian Turks established the first center of Turkic studies in the empire in an Üsküdar tekke. The district, known for its fine gardens, in recent years has become a large residential quarter of the city with a population over 200,000.

Warsaw , Warsaw first rose to prominence in the sixteenth century, when Poland and Lithuania joined to form a united republic. Because the city is located con… Budapest , the shared capital the national capital bibliography Budapest, the capital of Hungary, was also one of the two capitals, along with Vienna, of the Du… An Najaf , Najaf Najaf is one of several shrine cities and a major learning center for Shi˓a Muslims. Located south of Baghdad, Iraq, on a trade route between B… Crimean Tatars , A Turkic people who settled the Crimean peninsula over the two hundred years after Batu Khan's conquest, the Tatars of the Crimea came from Central A… Muscat , Muscat capital of oman; formerly a portuguese and later a british stronghold on the oman coast. Muscat's fine natural harbor has for centuries attrac… Tashkent , Tashkent is the capital city of the Republic of Uzbekistan, a country located in the region of Central Asia between the Amu Darya and Syr Darya river…