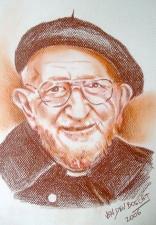 oxford
views updated
Conefroy, Abbé Pierre (1752–1816). French-Canadian Vicar-General for the Montréal region of the Diocese of Québec. He devised a standardized plan for churches, based on mid-C17 prototypes, in which the apsidal chancel was narrower than the nave, and transeptal chapels were provided. The gabled west front was pierced by a central door, with a smaller door on each side, and single or twin clochers were provided. Good examples of his work are the Churches of Ste-Marguerite, L'Acadie, Québec (1800–1), and Ste-Famille, Boucherville (1801). Such conservative (even backward-looking) architecture emphasized cultural and religious identity.

Lorenzo Ghiberti , Lorenzo Ghiberti (ca. 1381-1455) was an Italian sculptor, goldsmith, architect, painter, and writer. His east doors, called the Gates of Paradise, of… Apse , apse apse, apsis (pl. apses, apsides). Recess, generally semicircular on plan, and vaulted, projecting from an external wall, the interior forming a… Romanesque Architecture And Art , Romanesque architecture and art, the artistic style that prevailed throughout Europe from the 10th to the mid-12th cent., although it persisted until… Jakob Prandtauer , Jakob Prandtauer The Austrian baroque architect Jakob Prandtauer (1660-1726) is famed chiefly for his monastic and religious buildings, notably the a… Richard Upjohn , Richard Upjohn Richard Upjohn (1802-1878) was an English-born American architect whose expressive vocabulary of Gothic design helped to make this sty… Congregationalism , Congregationalism ★453 ★ Congregational Union of Canada (Defunct) (The Congregational Union of Canada no longer exists as a separate entity. It is no…