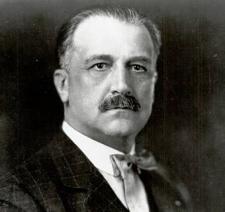 Within the pantheon of 20th-century American business leaders stands the Italian-American A. P. Giannini (1870-1949). As financier and banker he transformed the nature of banking in large and small ways; as an Italian-American he became a symbol of legitimate success and a source of practical help to immigrants and an inspiration to their descendants.

Amadeo Peter Giannini was born May 6, 1870, in San Jose, California, to Virginia and Luigi Giannini, immigrants from Genoa. The Gianninis possessed enough resources to lease a hotel in San Jose. After several years of successful hotel-keeping, Luigi purchased a 40-acre farm. He was killed in 1877 by a disgruntled worker in a quarrel over a one dollar debt. The following year Virginia married Lorenzo Scatena, who had worked his way to America from Lucca as a sailor. The Scatena family moved in 1882 to San Francisco, where Lorenzo took a job with a fruit wholesaling company in the district of North Beach. Success followed, and within a year Scatena had formed his own fruit company.

Amadeo was a good student, but the excitement of the business life—first tasted after school and on Saturdays in his stepfather's company—lured him into the adult work world after a brief course of study at Heald's Business College. His initiative and enthusiasm quickly resulted in greater responsibility, and by the age of 17 he was making regular business trips for the company. Amadeo, later to be known as A.P., exhibited at 17 many of the traits that would characterize his career as a banker. He worked long hours, was a careful observer of the business environment, and extended his personal and professional assistance to clients he deemed worthy. His efforts as a travelling commission man were eventually rewarded with a half-interest in Scatena & Co.

The rising young businessman married Clorinda Agnes Cuneo in 1892. Her father, Joseph, was one of North Beach's richest men, his fortune having been established in real estate. For nine years after his marriage A.P. continued in the commission produce business, retiring at the age of 30. His savings and real estate, together with $100,000 that he received from the sale of his interest in Scatena & Co., allowed him to support his family in a satisfactory manner. He summed up his attitude toward personal wealth: "I don't want to be rich. No man actually owns a fortune; it owns him."

After a brief flirtation with reform politics in Long Beach, Giannini began his banking career upon the death of his father-in-law in 1902. Joseph Cuneo died intestate and the family asked A.P. to manage the estate. Among the Cuneo holdings was an interest in a North Beach bank, Columbus Savings and Loan, which had been founded and was controlled by Italian-American John Fugazi. This first bank in the North Beach community preferred to make large loans, a practice which not only encouraged competition and the establishment of another Italian-American bank, but also gave rise to criticism by Giannini, who was a director of the bank. A.P. argued that the bank was not making enough small loans to the area's newcomers. He advised the bank to actively solicit their business.

Failing to convince the board of directors, A.P. resigned from the Columbus Savings and Loan in 1904 and set out to organize a bank which would follow his business strategies. By the summer of 1904 Giannini, along with other businessmen of Italian origin, organized the Bank of Italy, capitalized at $300,000, half of which was paid in immediately. A major portion of the bank's first day deposits came from small tradesmen who had been actively solicited by A.P. and other members of the bank. Often their ignorance of English or bank procedure required that deposit slips and checks be filled out by the bank's personnel.

The personal reputation and solicitation of Giannini and his associates were the main reason for the bank's growth. Giannini tramped the streets of North Beach explaining in Italian the functions of a bank, his bank, to people who had never used one. Giannini was making banking services available to people who had either been turned away or ignored by the larger, unfriendly banks. North Beach deposits remained in the community in the form of real estate loans as small as $375 or personal loans as small as $25.

A.P.'s imaginative behavior during the great San Francisco earthquake and fire of 1906 furthered his reputation and that of his bank. Although the quake occurred at 5 a.m., the Bank of Italy opened its doors at 9 o'clock and conducted business as usual. Giannini closed the bank at noon, however, fearing the worst as the fires spawned by the ruptured gas lines spread closer to the financial district. Securing horses and wagons from Scatena & Co., Giannini loaded the bank's cash and gold onto a wagon, hid them beneath a crate of oranges, and transported them to his home outside the city. There he hid the bank's assets in the ash trap of the living room fireplace.

A.P. saw in the city's destruction not only a chance to service his customers but another opportunity for the Bank of Italy. Nine days after the quake a newspaper advertisement announced the temporary location of the bank's operations. The city's larger banks were unable to respond as quickly. Giannini's foresight in removing his bank's cash together with his personal knowledge of his customers' accounts (he needed no records) allowed him to resume operations quickly. Deposits exceeded withdrawals in less than six weeks after the earthquake.

Giannini demonstrated similar ingenuity and foresight when in mid-1907 he picked up rumblings about future financial uncertainty despite the nation's prosperous economy. He began a campaign to increase the bank's gold reserves, build up deposits, and reduce outstanding loans after personal review. Thus, when the financial panic struck the Bank of Italy was able to meet it head on. Its stock of gold piled high in the teller's cage inspired confidence, and the bank did not have to invoke rules limiting withdrawals or requiring advance notice as other, larger institutions did. Once again the bank had weathered a major crisis due to the foresight of A. P. Giannini.

It was this same readiness to listen and to anticipate the future needs of his bank and customers that led Giannini to his greatest achievement—the pioneering of branch banking.

In 1908 Giannini heard several officials extol the virtues of branch banking as a solution to the various defects of American banking and as a means of bringing banks closer to the people. A.P. familiarized himself with Canadian branch banking practices and thus was prepared to act in 1909 when California enacted a law authorizing the establishment of branches. On Columbus Day, 1909, the directors of the Bank of Italy authorized the opening of such a branch in San Jose. When the Bank of Italy acquired control of a local San Jose bank A.P. sought local investors and retained many of the local personnel so that the branch would be seen as part of the community. By 1918 the Bank of Italy had become the first statewide branch banking system in the United States, with 24 branches throughout California and possessing more than $93 million.

The following year Giannini began to develop a transcontinental system. Leaders of New York City's Italian community had sought his assistance in establishing a regularly chartered depository of their own. Using proven techniques, A.P. first acquired the East River National Bank, and later the Banca Meridionale, a branch banking system in Italy. Thus he acquired the first elements in a transcontinental and worldwide banking system. Through reorganization and restructuring of these and other banks Giannini eventually formed the Bank of America, which possessed assets of $6 billion by 1939 and became the world's largest bank in 1945.

The Bank of America

Giannini's efforts were not without opposition and hostility. In 1919, for instance, California's superintendent of banks raised objections to A.P.'s opening of additional branches. He relented only after Giannini was able to convince him of the reasonableness of his motives and the falsity of the "whispering campaign" which had raised the doubts. The last great challenge to A. P. Giannini's banking empire came in 1948 when the Federal Reserve began an investigation into charges that his holding company had violated the anti-monopoly provisions of the Clayton Anti-Trust Act. A.P. died on June 3, 1949, however, before the board returned its findings and ordered that his corporate structure be dismantled. Later the U.S. Court of Appeals set aside the order, declaring that the Federal Reserve had failed to prove its charges of monopolistic practices.

A. P. Giannini's contributions were as a businessman and as an Italian-American. As a banker he established and refined branch-banking, and his bank became a model for the nation and the world. He stressed services for the "little fellow." Through his introduction of such practices as the repayable monthly home loan he brought home ownership within the reach of the multitudes. His concern for those previously ignored also included giving them representation in the management of his banks.

Giannini's success allowed him to assist fellow Italian-Americans in several ways. In addition to providing financial services, he is credited with having helped save alien Italians from the loss of their property and civil rights in California at the outbreak of World War II.

A. P. Giannini is listed in the Biographical Dictionary of American Leaders (1983) and in the Dictionary of American Biography Supplement. The most complete and authoritative account is Marquis and Bessie James, Biography of a Bank (1954). Andrew F. Rolle, The Immigrant Upraised (1968) sets Giannini's accomplishments in the context of the western American experience, as does Erik Amfitheatrof, The Children of Columbus (1973).