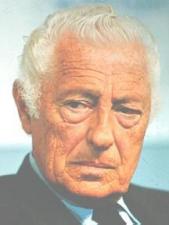 Giovanni Agnelli, 1866–1945, served as a cavalry officer until 1892. One of the founders (1899) of Fiat (Fabbrica Italiana Automobili Torino), he became its head in 1901. He also established (1907) Italy's first ball-bearing plant. Under Agnelli's leadership, Fiat became one of Europe's leading manufacturers of automobiles and also produced airplanes, railroad cars and locomotives, streetcars, and tractors as well as armament for the Italian military. He supported Benito Mussolini, who rewarded Agnelli with an appointment (1923) to the Italian senate. An important figure in Italy's World War II mobilization, Angelli was removed from Fiat's leadership after the war's end.

His grandson, Giovanni Agnelli, 1921–2003, known as Gianni Angelli, studied law at the Univ. of Turin and was an army officer during World War II. He was named a vice president (1953) of Fiat, managing director (1963), and chairman (1966), returning the company to family control. Also active in politics, he was appointed to the Italian senate in 1991. Under his direction, Fiat diversified into banking, insurance, energy companies, real estate, chemicals, newspaper publishing, tourism, and other industries. Although the Fiat car company was in serious financial trouble by late 20th cent., Gianni Agnelli remained committed to the family's original business, which accounted for less than a quarter of Fiat's holdings when he died.

His younger brother, Umberto Agnelli, 1934–2004, also studied law at the Univ. of Turin (grad. 1959), served (1976–79) as a senator, and was a senior Fiat executive, spending many years running the family holding companies IFI (est. 1927) and IFIL (acquired 1958). He was largely responsible for the diversification of Fiat that occurred during Gianni's chairmanship. Upon his brother's death, Umberto succeeded him as chairman, serving until his own death. Gianni's grandson, John Philip Elkann, 1975–, was his grandfather's chosen successor. Elkann, who grew up in Britain, Brazil, and France and studied engineering in Turin, joined the Fiat board at 22 and is widely considered the heir apparent to company leadership.

Giacomo Matteotti , Giacomo Matteotti Giacomo Matteoti (1885-1924) was leader of the Italian Socialist Party and bitter and effective critic of Mussolini's dictatorship,… James Couzens , James Couzens From an early age, James Couzens (1872-1936) demonstrated determination and incisiveness. The former enabled him to set a course of act… Italian Americans , ITALIAN AMERICANS. Italian influence on American history can be traced back to the navigators Christopher Columbus and Amerigo Vespucci. America's fo… Vittorio Emanuele Orlando , The Italian statesman Vittorio Emmanuele Orlando (1860-1952) was the leader of the Italian delegation to the Paris peace talks after World War I and… Risorgimento , Nationalist movement in 19th-century Italy culminating in the unification of the country by 1870. Its origins can be traced to the intellectual ferme… Italians , LOCATION: Italy POPULATION: About 58 million LANGUAGE: Italian, French, Slovene, German, and Fruilian RELIGION: Roman Catholic; small numbers of Prot…