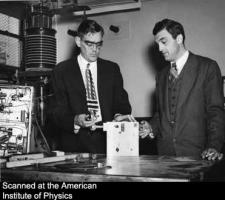 Encouraged by his father, a hardware store owner of Danish ancestry. Hansen showed great precocity in mathematics and electricity as a child. He entered Stanford University at sixteen, where he first studied electrical engineering and later physics, in which he received the doctorate with a dissertation on X-ray excitation (1933). After a year and a half as a Nationtal Research fellow at the Massachusetts lnstitute of Technology, he returned to Stanford in 1934 as an assistant professor. He turned his attention to the problem of accelerating electrons for experiments in X-ray physics, eschewing large static voltages in favor of arrangements utilizing rapidly varying fields, to avoid the difficult insulation problems of the former.

At this time, northern California was becoming a great center of nuclear research: Ernest O. Lawrence had recently invented the cyclotron at Berkeley and his co-worker David H. Sloan had proposed an accelerator, the voltage of which was produced by a resonating coil Hansen saw that, with a resonant cavity, power losses would be reduced for a given accelerating voltage, and he resolved to employ a high-qualily (“high-Q”) cavity resonator in place of the conventional coils and condensers: the inside of a hollow, closed-off conductor made of copper or some other highly conducting material. Although the resulting configuration came to underlie the design of all subsequent linear electron accelerators, it did not see immediate realization, for another important development intervened.

In 1937 two other Californians, the brothers Russel H. and Sigurd F. Varian, came to Stanford to develop a new source of ultra-high-frequency oscillations, which they foresaw would be useful in air defense. Hansen had employed electron tubes to excite his accelerator cavities. A new principle was now needed ic) avoid the pitfall of progresively smaller structures as frequency increased. Russel Varian solved the problem by the use of velocity modulation, in which the electrons traverse a cavity at the entrance to a drift tube, where they are concentrated into periodic bunches as a result of the varying accelerations imparted to them by the alternating cavity voltage, and then pass into a second cavity where the bunched electrons in turn induce oscillations (which may be fed back to the first cavity in a self-reinforcing manner). Hansen’s resonant cavity (christened the rhumbatron after a popular dance of the period) became an essential part of the new tube, which was designated as the klystron.

During the years 1937-1940, Hansen helped elaborate the theory and practice of the new field he had founded, microwave electronics., He pioneered novel configurations, measurement techniques, and solutions of radiation problems generally. Among his contributions dating from this period is the classic paper he coauthored with his pupil John R, Woodyard in which the total effectiveness (“gain”) of an antenna array was shown to be capable of being substantially increased when the elements do not radiate exactly in phase in the principal direction. (See “A New Principle in Directional Antenna Design,” in Proceedings of the Institute of Radio Engineers, 26 [1938], 333-345.)

In 1941 Hansen and his collaborators moved to the Sperry Gyroscope Company’s laboratory in Garden City, New York, where they remained until the end of World War II. There they worked on the klystron and on other electronic devices and their applications, including Doppler radar and blind landing sYstems for aircraft. Owing to his great versatility, Hansen was also able to contribute toward such diverse problems as the design of aircraft superchargers and the exploitation of atomic energy. The physicist Felix Bloch said of this period in Hansen’s career:

Equally versed in the methods and terminology of both, he was one of the first and most important links in the close connection between engineering and physics, which was responsible for the rapid development of radar. With his previous experience and clear insight in the principles of microwave technique he was asked to deliver a series of lectures at M.I.T and for a considerable period of time he willingly submitted to the strain of commuting between Garden City and Cambridge [Mass.]. In these lectures he touched upon almost all of the central problems, restricting himself to those topics which he knew to be of basic significance. Many of the leading scientists engaged or about to engage in leader research, were among the audience and gratefully acknowledge the important stimulus received from his masterly exposition [Biographical Memoirs National Academy of Sciences, 27 (1952), 128].

Bloch also acknowledged Hansen’s influence on the investigation of nuclear magnetic resonance, work for which Bloch shared the Nobel Prize in 1952.

Hansen returned to Stanford as a full professor in 1945 and laid the groundwork for the series of enormous linear electron accelerators (the accelerations of which are measured in billions of electron volts), powered by giant klystrons, that were subsequently constructed there. But he saw only the beginning of their realization. Hansen’s constitution had been weakened by the hard work of the war years, and he died a few days before his fortieth birthday, just after he had been elected to the National Academy of Sciences. Among his other honors were the Liebmann Prize of the Institute of Radio Engineers (1945) and the Presidential Certificate of Merit (1948), He was survived by his wife, Betsy, the younger daughter of Stanford physicist P. A. Ross but only briefly; she died (by her own hand) a few months later. The W. W. Hansen Laboratories of High Energy Physics at Stanford University are named in his honor.

For information on Hansen, see Felix Bloch, Biographical Memoirs National Academy of Sciences, 27 (1952.), 121-137, which contains a complete bibliography of Hansen’s twenty-eight papers and sixteen laboratory reports. Obituaries appear in New York Times (24 May 1949), and in Proceedings of the Institute of Radio Engineers, 37 (1949), 910.