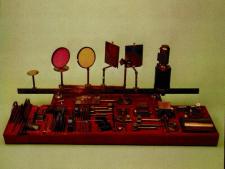 Melloni spent his early professional life as a professor of physics at the University of Parma between 1824 and 1831. Political difficulties arising out of the 1830 rebellions forced him to flee to Paris, where he lived without a position until 1839. He returned to Italy to become director of a conservatory of physics in Naples, where, until 1848, he also directed the meteorological observatory on Vesuvius.

As a physicist Melloni was concerned mainly with the properties of radiant heat or catorific radiation as it was then called. Since 1820 it had been thought, after a suggestion by Ampère, that the rays of light and those of heat are different manifestations of the same process. According to Young and Fresnel light is a transverse disturbance or wave propagated through a ubiquitous medium called the “luminiferous ether.” Rays of heat were thought to be modifications of these waves, not very, if at all, different from the rays of light. There were, however, difficulties with this view which centered about the propagation of heat and light through matter. If, it was thought, heat rays and light rays are the same things, then there should be little difference in the ways they are transmitted through matter. Thus an optically transparent body should transmit the heat it intercepts in the same manner it transmits the light that impinges upon it. The problem was that in many instances the effects of radiant heat on matter are very unlike those of light.

Early in his career Melloni became convinced that, while radiant heat is a wave in ether as is light, it is not the same kind of a disturbance as a ray of light. His first experiments were designed to pinpoint the differences between these two kinds of propagation. In 1832, for example, Melloni attempted to show that, contrary to general belief, radiant heat and light are not transmitted in the same amounts through a given transparent body. In his experiment he demonstrated that the quantity of heat a body transmits is not related in any degree to its transparency, that is, to the amount of light which it can transmit. In fact the only relationship he could find was between the body’s permeability to heat and its index of refraction (1). This strengthened him in his belief that heat rays and light are both ethereal vibrations but not the same kind of vibration.

Between 1833 and 1840 Melloni continued in his attempts to find the differences between heat and light. His experimental accounts, if read singly, often seem to be showing that heat and light are the same, not that they differ. But Melloni expected to find many similarities—since both are ethereal vibrations. What he sought were the differences in their effects. He showed in 1833 that the same body has different effects on heat and light; radiant heat, for example, is unaffected by the same polarization arrangement that extinguishes light (3). By 1835 Melloni was certain “…that light and radiant heat are effects directly produced by two different causes” (4). These causes are both molecular vibrations that set the ether in motion, but the molecules move differently when producing the vibrations of heat than they do when producing those of light. As he continued in his investigations he found that the rays of heat can actually be polarized, but in a way bearing no relation to the effects of the same polarization apparatus on light—further evidence, he thought, of the different origins of these two kinds of ethereal motions (2).

Between 1834 and 1840 Melloni began to concentrate on the behavior of bodies transmitting heat radiation. He was by then certain that heat and light are distinct modes of the same process, ethereal propagation, and he looked for those details of the transfer of heat that distinguished it from that of light. His theoretical distinction between the two kinds of waves aided him because he was always looking for differences and not similarities. For example, it was held that the amount of light that is transmitted by a body depends somehow upon the state of its surface, upon its degree of smoothness or lack of irregularities. Melloni, because he distinguished between heat and light, did not believe that this would be strictly true for heat. In 1839 he tried to show that, if a smooth‐surfaced body transmits heat more readily than one with a rough surface, it is not because of some special surface regularity, as it is with light, but because the polishing necessary to make the surface smooth had so altered its elasticity that the rate at which it could transmit the vibrations of heat was also changed (6, 7). The importance of Melloni’s work for later generations lies in the detailed investigations he made into the behavior of heat and the new knowledge about it that resulted.

Tapas , TAPAS Although the root meaning of tapas is "heat," this versatile term can indicate creative cosmic energy, sexual fervor and chastity, ecstasy and… Luminescence , The term luminescence is used to describe a process by which light is produced other than by heating. The production of light from heat, or incandesc… Calorimetry , Calorimetry is the measurement of the amount of heat gained or lost during some particular physical or chemical change. Heats of fusion or vaporizati… Evaporation , Evaporation is the movement of a substance from its liquid to its vapor phase. (Movement directly from solid to vapor phase is called sublimation.) I… Insulation , insulation Technique for reducing or preventing the transfer of heat, electricity, sound or other vibrations. Wool, fibre-glass and foam plastic are… Heat Exhaustion , Heat Exhaustion Heat exhaustion is the second in the triad of heat-related injuries, more serious than the muscle spasm contraction known as heat cra…