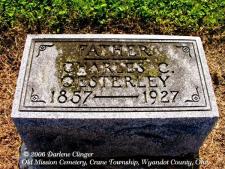 After a brief career in business, Perrine, who was skilled in photography, became professionally interested in astronomy. In 1893 he joined the staff at the Lick Observatory as secretary; shortly thereafter he became widely known for his discovery, observation, and calculation of orbits of comets and for his determination of solar parallax from observations of the asteroid Eros. He was made acting astronomer and then astronomer. In 1901 he discovered motion in the nebulosity surrounding a nova in Perseus.

Between 1900 and 1909 Perrine accompanied four eclipse expeditions, directing one in 1901 from the Lick to Sumatra. He also spoke on eclipses at the International Congress of Sciences (1904) in St. Louis. Perrine’s most widely acclaimed scientific achievement occurred in 1904 and 1905, when he discovered the sixth and seventh satellites of Jupiter. His subsequent research, initiated by J. A. Keeler, with the Crossley reflector at the Lick was less publicized but of considerable importance; it led to most of the work contained in volume VIII of the Publications of the Lick Observatory, which dealt with nebulae and star clusters.

In 1909 Perrine was appointed director of the Argentine National Observatory at Cordoba. He was also responsible for the establishment of the astrophysical station in Bosque Alegre. The sisty-inch reflector at this station made it one of the principal observatories in the Southern Hemisphere. Sixteen volumes of the Resultades del Observatorio Nacional Argnetino were published during Perrine’s directorship.

Despite his scientific achievements, Perrine and his office became a target for nationalist politicians and he was attacked verbally by deputies in the Argentine Congress. In 1931 he was barely missed by a sniper’s bullet and in 1933 the Argentine Congress passed legislation removing authority from the director of the observatory. He retired, under duress, in 1936.

Perrine received several honors, including the Lalande Prize from the Paris Academy of Sciences in 1897; the Gold Medal from the Socieded Astronomica de Mexico; and an honorary Sc.D. from the University of Santa Clara, California, in 1905. He was president of the Astronomical Society of the Pacific in 1907, and a member of various American and foreign societies.

II. Secondary Literature. Biographical information on Perrine is given in Jacques Cattle, ed., American Men of Science, 8th ed. (Lancaster, Pa., 1949), 1928; and a brief obituary by Jorge Bobone appears in Publications of the Astronomical Society of the Pacific,63 (1951), 259. A collection of some of Perrine’s correspondence with Hale is contained in “The George Ellery Hale Papers 1882–1937,” microfilm, ed., California Institute of Technology (Pasadena, Calif., 1968).