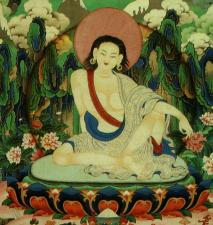 oxford
views updated
Milarepa ( Mi-la Ras-pa) (1043–1123). Tibetan Buddhist who remains exemplary to many Tibetans, and who was instrumental in founding Kagyü. He was recognized by Marpa as his chief disciple. He entered on a mainly isolated life, often walled up in caves for months or years at a time. Nevertheless, disciples came to be near him from many parts, and the lineage of yogins derived from him continues to the present, well-adapted to the persecutions inflicted by the Chinese on Tibetan religious practitioners. Two collections of songs are attributed to him.