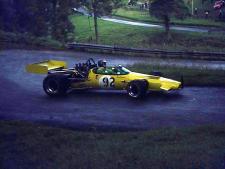 Crawford Williamson Long (1815-1878), American physician, is credited with the first use of ether as an anesthetic in a surgical procedure.

Crawford Long was born in Danielsville, Ga., on March 1, 1815. At the age of 14 he entered Franklin College in Athens (later the University of Georgia), graduating in 1835. The following year he served as principal of an academy in Danielsville while studying medicine with a doctor in a nearby town.

In 1836 Long entered the Medical Department of Transylvania College at Lexington, Ky., and in 1838 he transferred to the University of Pennsylvania Medical School, from which he received his medical degree in 1839. He then went to New York, where he studied surgery for 18 months. In 1841 he established a practice in Jefferson, Ga. In the summer of 1842 he married Mary Caroline Swain.

On March 30, 1842, Long used ether as an anesthetic during the removal of a tumor from the neck of James M. Venable. His use of ether came from observations made at "ether frolics." Ether, in limited quantity, produces exhilaration rather than unconsciousness, and the inhalation of ether for this effect was common. Long participated in many ether parties and often noticed that participants received bumps and bruises but experienced no pain. After his success with ether in the surgery on Venable, Long used it whenever possible; but for reasons that are not clear, he made no effort to make his discovery public until 1848, when he announced it to the Medical College of Georgia in Augusta. By then, however, nitrous oxide as an anesthetic had been introduced by Horace Wells, and ether anesthesia had been publicly demonstrated by William Morton and Charles T. Jackson of Boston.

Although Long is historically credited with the first use of ether, his delay in announcing his discovery lessened recognition for him and robbed him of a primary position in the discovery of modern anesthesia. In 1849 Long published a claim to the discovery of ether in the Southern Medical and Surgical Journal entitled "An Account of the First Use of Sulphuric Ether by Inhalation as an Anesthetic in Surgical Operations, " and this claim became part of a long and bitter contest over priority of discovery.

In 1851 Long moved to Athens, Ga., where he built a thriving practice and spent the rest of his life. During the Civil War he enlisted in the Georgia infantry. After the war he was appointed surgeon to the military post in Athens. He died on July 16, 1878.