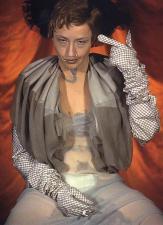 Cindy Sherman (born 1954) used photography to challenge images in popular culture and the mass media. Her work concentrated on examining the way women are viewed by society. She used herself as a model in the 1977-1980 series of 69 black-and-white photographs called "Untitled Film Stills." Sherman's later series included themes of pornography, Old Master paintings, and fairy tales, as well as dismembered medical dummies in graphic poses.

Cynthia Morris Sherman was born in Glen Ridge, New Jersey, on January 19, 1954 and was raised in suburban Long Island, New York. Her father's hobby was collecting cameras and taking family photos. As a child Sherman spent a lot of time playing dress-up, an activity that she later used in her work. In 1972, Sherman enrolled at the State University College at Buffalo, New York, as an art education major, where she began studying painting. Sherman painted self-portraits and realistic images she found in magazines and photographs. She failed her introductory photography course because of difficulty with the technological aspects of print-making.

In 1975, Sherman was introduced to conceptual art, which had a liberating effect on her. She returned to her childhood love of dress-up in her work, spending many hours trying to transform her appearance. She would then go out so that others could see her "work." Sherman now saw the potential of using photography to unleash her creativity. In 1975, she produced a series entitled "Cutouts" in which she was the character in her made up plot. She then took the photographs and cut them out and arranged them on paper panels. These works were included in an exhibit of New York artists. By the end of her second photography class, Sherman realized she would never paint again.

Upon graduation in 1977, at the age of 23, Sherman moved to New York City. She continued her role-playing and began photographing herself in her apartment, outdoors in New York City, on Long Island, and in the Southwest. Sherman shot most of the photographs, but family and friends took others. She posed in a repertoire of images familiar from popular culture. The prints were small black-and-whites. There were 69 photographs in the series, entitled "Untitled Film Stills," which Sherman created between 1977 and 1980.

Sherman's characters in the "Untitled Film Stills" were not specified, allowing viewers to construct their own narratives. She encouraged viewer participation by hinting, through the poses, that she was the object of someone's gaze. Her film stills looked and functioned just like real film stills, 8 x 10 inch glossies designed to lure the viewer into a drama, made all the more compelling because they were not real. "She's good enough to be a real actress," said pop artist Andy Warhol in comments included at the web site of the Museum of Modern Art in New York.

The entire series was first exhibited at the Hirshhorn Museum in Washington, DC, in 1995. It depicted the different identities that women have held since World War II. Similar characters appear in several photographs, forming mini-series within the larger group. The first six images depicted the same blond actress at different points in her career. In each shot, Sherman was alone, a familiar but unidentifiable film heroine in an appropriate setting. The portrayals included a floozy in a slip with a martini, a perky B-movie librarian, a secretary in the city, a voluptuous, a working class woman from an Italian neo-realist film, an innocent runaway, and a film noir victim. In some images, Sherman appears as a seductress. Amanda Cruz in Cindy Sherman: Retrospective, quotes Sherman as saying "to pick a character like that was about my own ambivalence about sexuality-growing up with the women role models that I had, and a lot of them in films, that were like that character, and yet you were supposed to be a good girl." Through her work, she asked viewers to question the way media images influence our ideas about gender roles.

At the Masters of Photography website, critic Lisa Philips is quoted as saying that Sherman's photographs "project a … mixture of desire, anticipation, victimization, and suffering," and as a photographer she deflected the gaze of the viewer away from her subject and "toward reproduction itself, forcing the viewers to recognize their own conditioning." Sherman's use of photography is predicated on the uses and functions of photography in the mass media, in advertising, fashion, movies, pinups, and magazines. Cruz said "Cindy Sherman began her now famous series "Untitled Film Stills" twenty years ago, at the end of 1977. Those small, black-and-white photographs of Sherman impersonating various female character types from old B movies and film noir spoke to a generation of baby boomer women who had grown up absorbing those glamorous images on television, taking such portrayals as cues for their future. With each subsequent series of photographs, Sherman imitated and confronted assorted representational tropes, exploring the myriad ways in which women and the body are depicted by effective contemporary image-makers, including the mass media and historical sources such as fairy tales, portraiture, and surrealist photography."

As early as 1979, articles about Sherman's work appeared in Arts Magazine and October. In nearly ten years she had over 30 one-person shows at prestigious museums and galleries in the U.S. and abroad. Over 100 articles in such publications as Life, the Village Voice, Vogue, Art Forum and the Wall Street Journal have featured Sherman and her work.

In 1981, Sherman opened her first one-person show. As the 1980s progressed, her style began to change, becoming much darker. While Sherman worked for a clothing line, she produced photos that included very bizarre characters and poses. In the series "Fairy Tales," the typical images of fairy tales were replaced with death and decay. Monsters and beings with grotesque body parts exaggerated the male and female stereotypes in Western art. Sherman looked at the violence and horror in fairy tales and their sexual underpinnings.

"Sex Pictures" contained grotesque and surreal images created with mannequins and prosthetic devices. In Sherman's most graphic photos, she began to use body parts found at medical schools and incorporated them into her pictures. These body parts were intended to question the sexual tendencies of our culture.

Sherman turned to Old Master paintings for further inspiration, and created a series of photographs in which she was dressed as figures in famous works by Caravaggio, Raphael, and others. These photographs crossed the boundaries between postmodern playfulness and the exploration of self through portraiture. "Historical Portraits" is a photographic series devoted to reinventing classical high art using large color photographs. "Salome and the head of John the Baptist" was an important scene for the Symbolists of the late 1800s. Most artists painted this scene. Sherman also tried her hand at this subject. Her image "Untitled a 228" shows Salome holding a knife and the severed head of a wrinkled old man.

"Untitled a 204" is a photograph based on Jean Auguste Dominique Ingres' "Madame Moitessier." Ingres painted a middle-age woman reclining on a couch, dressed formally with elegant bracelets and a necklace. Sherman's interpretation is quite different. The face of Sherman's Madame is bruised and the clothes and jewelry are less elegant. Sherman juxtaposes how women were depicted in art with how women are actually treated. In one photo, Sherman exposes milk-swollen (plastic) breasts and holds a (false) pregnant belly under a shawl.

In 1978, Sherman received a National Endowment for the Arts fellowship. She also was given a MacArthur "genius grant" in 1995. The art market crash of the 1990s spared her, unlike many contemporaries. In December 1995, the Museum of Modern Art purchased the complete "Untitled Film Stills" for a reported $1 million, and exhibited the collection in 1997. The purchase insured that this landmark body of work would be preserved in its entirety in a single public collection.

Joining artist-directors like Robert Longo, Julian Schnabel, and David Salle, Sherman was signed in 1996 by Miramax to direct a low-budget film about an office worker turned serial killer.

Sherman's photographs can be found in a large number of museum collections and private galleries. Her work has been shown at the Ansel Adams Center of Photography in San Francisco and at A Gallery in New Orleans, but most of her showings are held in New York City. "Cindy Sherman: Retrospective" was exhibited at Chicago's Museum of Contemporary Art, in 1998. The show also traveled to Prague, London, Bordeaux, Sydney, and Toronto. Sherman lives in New York and continues to produce personal work as well as commercial commissions.