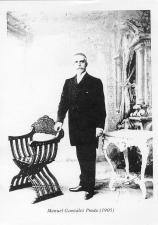 The Peruvian essayist and poet Manuel González Prada (1848-1918) was one of the most dynamic and aggressive polemicists of the late 19th century in Spanish America. He fought for change and progress and denounced the vestiges of Spanish colonialism.

Manuel González Prada was born on Jan. 6, 1848, in Lima, the son of a wealthy and conservative family. A rebellious child from his early years, he ran away from the seminary where he had been placed by his devout mother and began his university career studying German poets. Later he switched to law, the field in which his family wanted him to take a degree, but then made up his mind to become a farmer.

González Prada began writing poetry during this period, and in 1871 his verses were included in José Domingo Cortés's anthology, América poetica. González Prada married a Frenchwoman, Adriana de Verneuil; they had three children, of whom only one, Alfredo, survived. In 1879 González Prada enlisted for duty in the War of the Pacific (1879-1883) between Chile and Peru. When Peru was defeated, he remained in his house during the entire 3 years of Chilean occupation, determined not to lay eyes on the conquerors of his homeland.

After 1883 González Prada traveled to Europe and spent some time in Paris, reading and absorbing the ideas of modern German, Italian, and French writers, as well as the theories of the French writers of the Enlightenment and those of many of the positivists.

When González Prada returned to Lima, he immediately assumed a prominent place in the vanguard of Peruvian national awareness. Writers and political figures alike caught the contagious fire of his revolutionary fervor. He spoke out eloquently not only against the stagnant aristocratic class from which he had come, but also against the rejection of the Indian as an element of the national character and against the clergy and the ruling military oligarchy, which he viewed as the sources of many of the country's chronic ills.

González Prada became the articulate standard-bearer for a new generation of Peruvians who gathered about him, answering the call he had put forth in these lines from one of his early essays: "The decayed and wormeaten tree trunks have already produced their flowers of poisonous fragrance and their bitter-tasting fruits! Let new trees grow and yield new flowers and new fruits! Old men to the tomb, young men to work!"

The principal works of prose published in González Prada's lifetime are Páginas libres (1894) and Horas de Jucha (1908). After his death in 1918, more than half a dozen volumes of his prose writings appeared. His most celebrated collections of poetry are Minúsculas (1901), Presbiterianas (1909), and Exóticos (1916). Other important volumes of his poetry are Trozos de vida (1933), Libertarios (1938), and Baladas peruanas (1939).

Despite his intensely active public career, which included forming the first Peruvian Radical party (1891) and directing the National Library in Lima (1912-1918), González Prada possessed sufficient compulsive renovating energies to bring the enrichment of new French, English, and Italian verse forms to Spanish-American poetic expression. Critic Orlando Gómez-Gil has observed, "In his writings as much as in his life, González Prada demonstrates an innovative and revolutionary spirit that is peculiarly and unmistakably his alone." González Prada died in Lima, on July 22, 1918.

There is no book-length study of González Prada in English. A good sketch of his life and work is in William Rex Crawford, A Century of Latin American Thought (1944). González Prada's influence on the Aprista movement is analyzed in Harry Kantor, The Ideology and Program of the Peruvian Aprista Movement (1953), in Robert E. McNicoll, "Intellectual Origins of Aprismo," and in Harold A. Bierck, ed., Latin American Civilization: Readings and Essays (1967). See also German Arciniegras, Latin America: A Cultural History (1965; trans. 1967). □