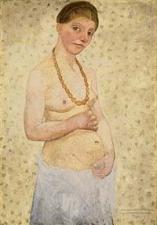 Paula Modersohn-Becker (1876-1907) was the first German painter to assimilate the Post-Impressionist currents she discovered for herself in Paris and to forge a very personal style, creating some unquestioned masterpieces during her brief career.

Paula Becker was born on February 8, 1876, into a cultured middle-class family in Dresden which moved to Bremen in 1888. Her father, a government railroad official in early retirement and failing health and concerned about his six children's financial security, insisted that the young Paula complete a two-year teachers' training program before allowing her to study at the school for women artists in Berlin. In September 1898 she settled in the nearby artists' colony of Worpswede to work with its celebrated figure painter, Fritz Mackensen. The Worpswede peasant women, often with their infants, and the old women and children from the poor house became her favorite models, and she recorded the picturesque landscape, the dark moors and stormy skies, fields with thatched cottages, woods of slender birch trees, and canals for transporting peat moss to Bremen.

But she soon looked beyond Worpswede to Paris. She went there from January to June 1900, studying at the Académie Colarossi, visiting the Louvre museum, and seeing new art shown by dealers and at the International Exposition. Even after her marriage in May 1901 to the Worpswede landscapist Otto Modersohn—recently widowed and with a young daughter—she escaped to Paris again for five weeks in the spring of 1903 and for two months in February-April 1905, now studying at the Académie Julian. In February 1906 she left her husband to devote herself exclusively to art, but he followed her to Paris and persuaded her to return in March 1907 to married life in Worpswede. She gave birth to their daughter Tille on November 2nd; on November 20, 1907, she died of an embolism and heart attack. She was 31 years old.

Modersohn-Becker produced some 1,000 drawings and 400 paintings during her brief career and documented her thoughts and experiences in her journals and extensive correspondence. Her earliest work reveals her artistic beginnings in Worpswede naturalism, but she soon recognized its limitations. Her teacher Mackensen was too much oriented to the past, too "conventional" (letter of early May 1900); his work was "not broad enough … too genre-like" (December 1, 1902). In her journal she clarified her artistic goal: to "strive for the greatest simplicity together with the most intimate observation" and "to achieve grandeur through simplicity". The masterpieces in the Louvre, which she frequently sketched, became her best teachers, and then the Post-Impressionist masters: Vincent van Gogh, Paul Cézanne, and Paul Gauguin, whose innovations she absorbed and transformed into her personal style.

She had visited the van Gogh retrospective in March 1905, and we can recognize the impact of his rich color harmonies and emphatic outlines in her masterful painting Old Peasant Woman Praying—her one major picture in an American museum, in Detroit. The old woman, with weathered yellow skin against luminous green foliage, is portrayed with respect and sympathy, in no way romanticized or sentimentalized. Cézanne she had discovered as early as 1900, in Vollard's art gallery, but his influence becomes most evident in some magnificent still lifes of 1905 and 1906, and in the simplified color planes of her late figure studies.

She mentions Gauguin in letters of 1905 and certainly visited his memorial exhibition in the autumn of 1906. The deep, exotic colors of Self-Portrait with Camellia Branch may be indebted to Gauguin. Its hieratic frontality and mysterious sense of otherworldliness also are derived from late Classical, Coptic mummy portraits that she admired in museums and in a volume of reproductions she received for her thirty-first birthday. She painted many other memorable self-portraits. Having promised herself "to amount to something" by age 30, she duly marked that milestone with a unique and daring self-portrait painted on her wedding anniversary in 1906. She stands half nude and as if pregnant— the traditional role she had abandoned (or merely postponed) to nurture her artistic self. In another late self-portrait that exists in two versions, in Bremen and Basel, she again appears half nude against a leafy background and with flowers in her hair, like the Tahitian women of Gauguin's natural paradise and the very image of youthful vitality and creativity.

We can also follow Modersohn-Becker's stylistic growth in another theme for which she is known and admired, that of mother and child. Her early maternities of 1903 and 1904 are realistic in the Worpswede tradition, although they are simplified and already painted in a broader manner. In 1906 in Paris she found an Italian model with an infant who posed for some of her greatest paintings: a beautiful Reclining Mother and Child, lying naked on the ground and curled protectively around her baby, or the Kneeling Mother and Child, which suggests an ancient fertility goddess. Like much of her art, they are compelling images of both personal and universal meanings. Many of these paintings can be seen in the Bremen museum devoted to her work, the Paula Becker-Modersohn Haus (Ludwig Roselius Collection).

Modersohn-Becker was an exceptional young woman who wanted to dedicate herself to art rather than conventional domesticity despite pressure from family and friends. She worked alone, unaware of the beginnings of German Expressionism in Dresden, Munich, and Berlin—although she has been considered a precursor of that movement. Furthermore, she differed from many of these near-contemporaries and their aggressive emotionalism by her greater emphasis on formal values. Having absorbed the lessons of Post-Impressionism, she flattened her pictorial space or structured Cézannesque color planes into modernist styles that parallel or even anticipate Picasso's primitivism and first Cabist experiments of 1906 through 1908.

The best book about the artist is one of her own writings, finally available in English: Paula Modersohn-Becker: The Letters and Journals (1983) translated by Arthur S. Wensinger and Carole Clew Hoey from the new and enlarged German edition (1979) compiled by Günter Busch and Liselotte von Reinken. A briefer version, The Letters and Journals of Paula Modersohn-Becker (1980), translated by J. Diane Radycki from the incomplete German edition of 1925, is also available. Both have helpful prefaces and notes. Gillian Perry has written a well-documented biography (with 25 color plates of uneven quality), Paula Modersohn-Becker: Her Life and Work (1979). The three books are reviewed in Woman's Art Journal, fall 1981/winter 1982 and fall 1984/winter 1985. For general background, see the exhibition catalogues Expressionism: A German Intuition, 1905-1920 (1980) and Women Artists: 1550-1950 (1976) by Ann Sutherland Harris and Linda Nochlin.