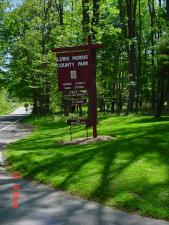 The son of a Barbadian merchant, Lewis Morris was born on Oct. 15, 1671, on the 500-acre estate his father and uncle had purchased in New York. His parents died the following year, and the uncle became Morris's guardian, trying to raise his ward with Quaker discipline. A headstrong boy, Lewis improved sufficiently so that, when his guardian died in 1691, he inherited the quadrupled Bronx estate and 3,500 acres in Monmouth County, N.J.

Morris married Isabella Graham, daughter of New York's attorney general, on Nov. 3, 1691, establishing his home in Monmouth County. Quickly he became a lesser judge in East Jersey and member of Governor Andrew Hamilton's council. Morris visited England in 1702 to promote transfer of the colony from the proprietors to the Crown, hoping to be appointed first royal governor. The ministry, however, named Lord Cornbury executive for both New York and New Jersey. Disappointed, Morris returned home, where he again became a member of the council, but his outspoken criticism of the corrupt Cornbury resulted in his dismissal. Elected to the Assembly in 1707, he collaborated in New Jersey's formal protest against Cornbury's conduct, which brought the governor's removal the next year.

Endorsing the able administration of the new governor, Morris spent more time in New York, particularly after Governor Hunter made Morris chief justice of that colony (1715). Nevertheless, he continued serving on New Jersey's council under succeeding governors. When William Cosby took over, Morris fell out with the royal representative, ruling one of Cosby's proceedings illegal. Removed from the bench (1733), Morris was elected to the New York Assembly, where he battled Cosby's "court party." In 1734 he carried the Assembly's case to London, failing to get the new chief justice removed but winning vindication of his own judicial conduct.

When New Jersey became a separate province in 1738, Morris was named governor. In office he was a strong executive, hostile to any questioning of his authority. He engaged in wordy controversies with the legislature over taxation, the militia, land titles, and bills of credit. Morris frequently upbraided the Assembly over its duties, protesting to England that the Assembly claimed as much power as the British Commons. An Anglican vestryman, he actively supported the Church's missionary and educational activities. Although he was vain and contentious, Morris gave New Jersey an honest administration. He died near Trenton on May 21, 1746.