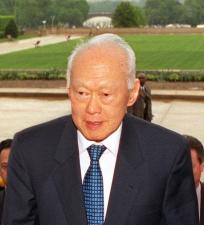 Lee Kuan Yew (born 1923) became prime minister of Singapore in June 1959. During his administration Singapore became part of Malaysia in September, 1963, and attained independence in August, 1965, after separation from Malaysia. Under Lee's leadership, Singapore was transformed into a modern and affluent citystate.

Lee Kuan Yew was born in Singapore on September 16, 1923. He came from a middle class Chinese Hakka family which had been established in Singapore since his great grandfather migrated to the island in the mid-19th century. In 1931 he attended the Telok Kurau English School. Four years later, he moved to Raffles Institution, where he excelled in his studies and was always at the top of his class. Even at that early age, Lee demonstrated his potential and one of his teachers in Raffles Institution correctly predicted that he would "do well, unusually well" and attain "a high place in life." In 1939 Lee sat for the Senior Cambridge Examination and emerged as the top student for the whole of Malaya. The outbreak of World War II in Europe made him shelve his plans for further studies in England. He returned to Singapore and accepted a scholarship he had won to study economics, English literature, and mathematics at Raffles College, where he met his future wife, Kwa Geok Choo, and some of his future colleagues.

When the Japanese conquered Singapore in February 1942, Lee was nearly 19 years old. The Japanese occupation had a tremendous impact on Lee. His studies at Raffles College were interrupted, and he learned Japanese and became a translator for the official news agency, Domei. More important, it was during this period that Lee's nationalist pride was kindled. He was painfully aware that the Japanese as well as the British, as foreigners, had no right to govern his people. He therefore resolved to make Singapore independent and free from foreign rule. Lee described the impact of the Japanese occupation on him in the following way:

I did not enter politics. The Japanese brought politics to me. … The Japanese occupying forces were blind and brutal and made me, and a whole generation like me, in Singapore and Malaya, work for freedom— freedom from servitude and foreign domination. We decided that from then on our lives should be ours to decide, that we should not be the pawn and playthings of foreign powers. (Quoted in Alex Josey, Lee Kuan Yew, Singapore: 1968.)

Although Lee's political philosophy and ideas took root during the war, they had developed, like those of his colleagues, during his early college days in England, where he was exposed to the ideas of Fabian socialism. Immediately after the war, Lee went to England, enrolling first at the London School of Economics and then proceeding to Cambridge University, where he studied law. At Cambridge he established an excellent academic record and won a star for special distinction by graduating with a "double first"—that is, first class honors in his two crucial comprehensive examinations.

Lee returned to Singapore on August 1, 1950, and was married on September 30, 1950. He joined the law firm of Laycock and Ong and after a few years established his own company, Lee and Lee, in partnership with his wife and elder brother, who was also a British-educated lawyer. However, he was more interested in politics and the anticolonial movement in Singapore. He became the honorary legal adviser for several trade unions after being acquainted with their leaders. He first caught the public eye in February 1952, when the Postal Workers Union succeeded, with his guidance, in obtaining important concessions from the colonial government. During the same year the first of his three children, Lee Hsien Loong, was born.

From 1952 to 1954, Lee met Goh Keng Swee, Toh Chin Chye, S. Rajaratnam, K. M. Byrne, and Samad Ismail weekly or fortnightly in his home. They discussed, among other things, the formation of a political party which would accommodate nationalists as well as those with radical political views. Their deliberations led eventually to the formation of the People's Action Party (PAP) on November 21, 1954, with Lee as its secretary-general.

In April 1955, the PAP fielded four candidates in the election for a partially elected government, and three of its candidates were elected, including Lee, who was the PAP's candidate for Tanjong Pagar. This made Lee the longest serving member of parliament in the 1980s. In the first general election of May 30, 1959, the PAP fielded candidates in all the 51 electoral constituencies. It won 43 out of 51 seats and obtained 53.4 percent of the votes. On June 3, 1959, Singapore attained self-government, and two days later Lee and his colleagues formed the first government, with Lee as the first prime minister.

Lee retained his position as prime minister when Singapore joined Malaysia in September 1963, and also after the attainment of independence in August 1965. The PAP government under Lee's leadership was in power for over a quarter-century as it was re-elected in the September 1963, April 1968, September 1972, December 1976, December 1980, and December 1984 general elections.

Singapore's political stability and rapid economic growth during 1959-1990 and its resulting affluence was not accidental but the result of Lee's dynamic leadership and effective policies. When Lee and his colleagues assumed office in 1959, they were faced with the serious problems of high unemployment, severe housing shortage, and widespread corruption. Accordingly, they initiated an industrialization program, a low-cost public housing program, and a comprehensive anti-corruption strategy to tackle these problems. Lee's government succeeded in solving these problems as per capita GNP rose by 15 times from US$443 in 1960 to US$6,634 in the mid-1980s. During the same period, unemployment was no longer a problem with the attainment of full employment and the proportion of the population residing in public housing increased by ninefold from 9 percent to 81 percent. Furthermore, corruption was no longer a way of life in Singapore by the 1980s because of Lee's personal commitment to its eradication through comprehensive legislation (the Prevention of Corruption Act), an effective enforcement agency (the Corrupt Practices Investigation Bureau) whose director reported to Lee directly, and periodic revision of civil service salaries and improvement of working conditions. Indeed, the quality of life in Singapore in the 1980s was much better as Singaporeans were not only better educated and informed, but also enjoyed a higher standard of living, better medical care and housing, and a longer life.

If Stamford Raffles was the founder of Singapore, Lee Kuan Yew was undoubtedly the founder of modern Singapore. In fact, Noel Barber sub-titled his book The Singapore Story (1978) "From Raffles to Lee Kuan Yew." Apart from being the only prime minister of Singapore for over 26 years, Lee was also perhaps the only non-Communist leader who succeeded in collaborating with the Communists during the nationalist struggle without succumbing to them after the struggle was won. He himself said that he and his colleagues were able to ride the Communist tiger without being eaten by it afterwards. The success of his various policies to make Singapore a better place to live in legitimized the PAP government's rule and kept the Communist threat under control.

In 1984 Lee announced that he would retire from public office in 1988, at the age of 65 years, following the practice of major U.S. corporations, although he held onto the position of prime minister until 1990. The cabinet which was formed after the December 1984 general election was dominated by the younger leaders, who were expected to take over from Lee and his older colleagues. In 1990 Lee turned over the reins of government to Min Goh Chok Tong, who became the the second prime minister in Singapore's history. Lee found himself in some controversy after he left office: it was reported in The Far Eastern Economic Review that he and his eldest son had purchased condominiums in housing-scarce Singapore at discount prices, a charge Lee strongly denied, and the New York Times reported that Lee won a $71,000 libel suit in April of 1997 against Christopher Lingle, a reporter from the International Herald Tribune, who had charged Lee had used Singapore courts as instruments of repression. Lee was hospitalized for heart surgery in early 1996, but swiftly recovered.

In a speech given June 7, 1996, to the Singapore Press Club and Foreign Correspondents Association, and reported by the Straits Times, Lee expressed his belief he had left his country in capable hands. "Singapore must have two preconditions to succeed: leaders who are tough-minded, dedicated, determined, able and honest, and people who are aware of our country's fundmanetal vulnerability who are willing to pull together to face challenges. We have to remain more tightly-knit, better organized and more capable or we will eventually be reabsorbed." About his decision to leave office, he said, "We put in our government a team of men of high capabilities and integrity." As to the question of whether Singapore can survive without him, Lee answered, "Yes, provided my country keeps strengthening its ties by continual self renewal and adjusting its policies to meet changing circumstances."

The most comprehensive biography of Lee is Alex Josey's Lee Kuan Yew (1968 and 1980) in two volumes which cover the 1959-1978 period. For a recent analysis of Lee's role in Singapore's political development, see John Drysdale, Singapore: Struggle for Success (1984). A study of Lee and the impact he has had on his country is Singapore-The Legacy of Lee Yew by Robert Milne and Diane Mouzy, (Boulder, West-view Press, 1990). Interviews with Lee and writings by him can be found in various issues of the Far Eastern Economic Review and the lawsuit by him is mentioned in "Singapore Ex-Premier Awarded $71,000 in Libel Case Damages," New York Times (April 16th, 1996). His heart surgery was mentioned in "Ailing," Asia Week (March 22nd, 1996). The text of Lee's speech before the Singapore Press Club can be found on the World Wide Web at http://www.Asia1.com/straitstimes/pages/lee57a.html. □