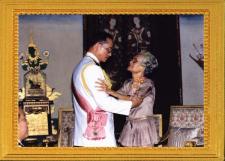 Bhumibol Adulyadej (born 1927) was declared king of Thailand in 1946 and formally crowned four years later. He represented the Chakri Dynasty that has preserved the independence of Thailand for more than 200 years.

King Bhumibol Adulyadej, born on December 5, 1927, in Cambridge, Massachusetts, is the only Thai monarch ever to be born abroad. He was the youngest son of Prince Mahidol of Songkhla, and the direct grandson of King Chulalongkorn (Rama V), noted for the widespread reforms he introduced into Thailand.

After a short period of primary school in Bangkok, King Bhumibol left with his family for Switzerland, where he attended the Ecole Nouvelle de la Suisse Romande, and then received his Bachelier des Lettres diploma from the Gymnase Classique Cantonal of Lausanne. He entered Lausanne University to study science but, following the mysterious death of his elder brother, King Ananda Mahidol, in June 1946, he was declared king, although his formal coronation did not take place until May 5, 1950. On April 28 of that year he married Queen Sirikit of the Kittiyakara family. He returned to Switzerland to study political science and law, but was called back to Thailand to deal with pressing national needs.

The role of the Thai monarch is pivotal in the society of Thailand. Not only is he the figure that has preserved the Thai state in the face of repeated external threats through the 200 years of the Chakri Dynasty, he is also the symbol of the nation. Even more, he is the focus of the continuity of Thai values and social cohesion in spite of rapid social and economic change. He is the leading supporter of Buddhism in Thai society, and the stability that he provides through his very presence is what allows swings of political activity and military coups to take place without threatening the fabric of Thai society. There is no question that he is widely revered.

Used His Position To Help His Countrymen

Traditionally, the monarch in Thailand has been considered above politics, and for years King Bhumibol played an inconspicuous political role in keeping with that view. He was, however, drawn into current events on occasion to mediate crises or negotiate compromises, and it was a testament to his position and the reverence in which he was held that he succeeded.

Bhumibol was a symbol both of national unity and of modernity. Unlike other monarchs before him, Bhumibol visited every province of his country and suggested infrastructural improvements that might benefit the people. His personal work in rural areas was widely acclaimed because of his success in convincing hill tribes to switch their growing of opium to that of vegetables, fruit, and coffee. As a result, opium cultivation declined by 85%. Village roads, electricity, and irrigation systems were all part of Bhumibol's rural development efforts and modernization of Thai farming.

Describing himself as "an amateur scientist," Bhumibol turned substantial portions of his Bangkok residence, the Chitralada Palace, into living laboratories where projects were undertaken to improve the standard of living. Royal Chitralada Projects included livestock improvement, milk production, hybridization of grains, bee keeping, fish breeding, reforestation, and various food processing techniques. According to the King's wishes, the palace grounds functioned as one great workshop and school for teaching and learning—all for the good of national development.

Because of his broad international training, the king was noted as a devotee of modern music and played the clarinet, as well as composed. He was said to have broad cultural interests, but the myriad ceremonial duties left him little time for personal interests.

King Bhumibol and Queen Sirikit had four children, a son and three daughters. The eldest child, Princess Ubon Ratana, was born in Lausanne, Switzerland, on April 5, 1951, and renounced her title when she married an American in 1972. Crown Prince Vijiralongkorn was born in Bangkok on July 28, 1952. He was a graduate of the Australian Royal Military Academy in 1975 and of the Thai Command and General Staff College in 1978. Princess Sirinthon was born on April 2, 1955, and was in a graduate education program at Srinakharinwirot; and Princess Chulaphon, who was born on July 4, 1957, studied chemistry at Mahidol University in Bangkok.

Although Bhumibol preferred his people to politics, he nevertheless commanded enough respect to successfully intervene politically when necessary. In 1981 he was able to thwart an attempted coup against Premier Prem Tinsulanond by simply requesting that those involved cease their efforts. In 1992 the King's public chastisement of the military government's handling of pro-democracy demonstrations again restored order. Bhumibol was universally revered throughout Thailand and contributed greatly to his country's stability. On June 9, 1996, Bhumibol celebrated his 50th anniversary on the throne, becoming Thailand's longest ruling monarch.

The Chakri Dynasty accomplished the difficult task of keeping Thailand independent in the face of colonial threats and created a modern state while preserving its cultural traditions. King Bhumibol continued in that tradition by extending the power of the central government to its peripheral geographical areas and attempting to improve the lot of the rural poor. As the chief supporter and principal patron of Buddhism, the king was in some real sense viewed as the symbolic embodiment of that long tradition.

There is no English language biography of King Bhumibol, but of course there are constant references to him in all standard books on Thailand. The Public Relations Department of the Royal Thai government has published a pamphlet, His Majesty King Bhumibol Adulyadej of Thailand (no date).

There are many good sites on the Internet to find information about King Bhumibol. Two of the best are His Majesty the King (<http://www.nectec.or.th/bureaux/prd/>) and the Internet Thailand Homepage (<http://www.inet.co.th/>). □