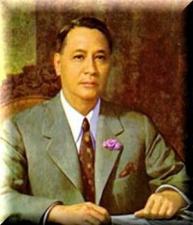 Manuel Roxas (1892-1948) was the last president of the Commonwealth and the first president of the Republic of the Philippines. His administration demonstrated decisively that political sovereignty without economic independence encourages reaction, perpetuation of social injustices, and exploitation.

Manuel Roxas was born in Capiz, Capiz Province, on Jan. 1, 1892. In 1914 he graduated from the College of Law of the University of the Philippines. In 1916 he became provincial governor. In 1922 he was elected to Congress, becoming Speaker of the Philippine Assembly.

In December 1931 Roxas, together with Senate president pro tempore Sergio Osmeña, left for the United States to secure the Hare-Hawes-Cutting Act from the U.S. Congress, which would grant Philippine independence after a transition period of 10 years. This bill was rejected by the opposition forces led by Manuel Quezon. In 1934 Roxas was elected to the constitutional convention. In 1938 he was appointed secretary of finance by Commonwealth president Quezon and then became his trusted adviser. In 1941 Roxas ran for the Senate and won.

On Dec. 8, 1941, at the outbreak of the war, Roxas served as lieutenant colonel in the U.S. Army Forces in the Far East (USAFFE). He refused to join Quezon in fleeing to the United States because he wanted to preserve the morale of the Filipino soldiers fighting in Bataan and Corregidor. He was captured in 1942 by the Japanese forces in Malaybalay, Bukidnon, and was forced to serve in the puppet government of José Laurel. Roxas accepted the position of chairman of the Economic Planning Board in Laurel's wartime Cabinet. During the Japanese retreat he allegedly escaped from the Japanese high command in Baguio on April 15, 1945.

Because of Gen. Douglas MacArthur's unexplained intervention, Roxas was never tried as a collaborator, though he had served officially in Laurel's Japanese-sponsored administration. When the Philippine legislature convened during the liberation, Roxas was elected president of the Senate on June 9, 1945. He broke with President Osmeña and formed the Liberal party, which he led to victory as presidential candidate on April 23, 1946. Roxas thus became the last president of the Commonwealth and the first president of the Republic of the Philippines when it was inaugurated on July 4, 1946.

Owing to the unfair demands of the Bell Trade Relations Act of 1945, which called for a revision of the Philippine constitution to give parity rights to Americans in exchange for rehabilitation money, Roxas found himself surrendering his country's freedom and its right to determine its own destiny. Faced by the unified opposition of workers and peasants, the majority of the people, Roxas sided with the oppressive landlord class and the colonialistic merchants to put down by force the legitimate aspirations of the electorate.

It is public knowledge that most of Roxas's policies were dictated by Gen. MacArthur and U.S. high commissioner Paul V. McNutt. Not only did Roxas lack the vision to foresee the causes that would strain Philippine-American relations later (for example, the Military Bases Agreement of March 14, 1947), but he also failed to sympathize with the plight of the majority of the poor.

Roxas was committing the Philippines to the side of the United States at the start of the cold war in a speech at the Clark Air Force Base when he suffered a heart attack on April 14, 1948. Loyal to the United States to the last, he died on American soil.