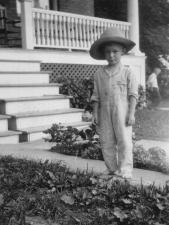 Donald Henderson (born 1928) spearheaded the drive to eradicate smallpox, the only disease ever to have been wiped out. He is the head of the Office of Public Health Preparedness, a position responsible for protecting the public from bioterrorism.

Donald Ainslie Henderson, known as D.A., was born in Lakewood, Ohio, in 1928 to David and Grace Henderson. He received his bachelor of arts degree from Oberlin College in 1950. In 1951, he married Nana Irene Bragg. The couple have three children. Henderson received his medical degree from the University of Rochester in 1954 and was an intern and resident at the Mary Imogene Bassett Hospital in Cooperstown, New York. From 1955 to 1966 he also worked for the Center for Disease Control.

Henderson ran the World Health Organization's smallpox eradication program from 1966 to 1977. During the 20th century, at least 300 million people died of smallpox. As late as 1960, about five million people a year died of the disease. The eradication of smallpox has been called "perhaps the greatest medical feat of all time." "An ancient, contagious and particularly hideous disease, smallpox kills a third of those infected with it, and Dr. Henderson is one of the few doctors in this country today to have actually seen a case," noted Sheryl Gay Stolberg in an article in the New York Times, dated November 18, 2001. "The World Health Organization's smallpox eradication program, which Dr. Henderson ran from 1966 to 1977, was, he said, the effort of countless public health workers who toiled under grueling conditions, often living in villages without electricity and running water, in nations torn apart by war. They operated under the principle of 'ring vaccination,' containing outbreaks by vaccinating every patient infected, and everyone around those patients, moving outward in concentric circles until the virus stopped spreading."

Smallpox experts believe the eradication effort, carried out with the former Soviet Union during the Cold War, succeeded because of Henderson's determination. When the health minister of Ethiopia would not cooperate with him, Henderson made his way into the country and got to know the personal physician of the country's emperor, Haile Selassie. When Henderson suspected the Russians were giving him an inferior smallpox vaccine, he traveled to Moscow—violating orders from his superiors, who were worried about a diplomatic nightmare—and demanded a better vaccine.

After finishing his work with the World Health Organization, Henderson served as dean of the Johns Hopkins School of Public Health from 1977 to 1990. He then worked for the administration of President George Bush, serving as science adviser to the White House from 1991 to 1993, as associate director of the Office of Science and Technology Policy. Henderson worked for the Department of Health and Human Services (HHS) from 1993 to 1995 as deputy assistant secretary of HHS for health and science. He left in 1995 because he felt he was being underutilized and returned to the Johns Hopkins School of Public Health as a professor. Because of his fears about bioterrorism, in 1997, Henderson founded and became director of the Johns Hopkins University Center for Civilian Biodefense Studies, a research institution.

Since smallpox was officially declared eradicated worldwide in 1980, a debate has raged among epidemiologists and others as to whether or not the two official stocks of the smallpox virus kept in freezers at the U.S. Centers for Disease Control and Prevention (CDC) in Atlanta, Georgia, and at the State Research Center of Virology and Biotechnology in Novosibirsk, Siberia, should be destroyed or maintained for future study. Henderson firmly believes that the virus should be destroyed, fearing that it could escape, but others want it preserved in order to develop better treatments, should smallpox ever be used as a weapon. Although officially only the U.S. and Russian smallpox stocks are known to exist, strong evidence indicates that Iraq, North Korea, and Russia are probably concealing the smallpox virus for possible military use.

Henderson has argued that the United States should be stockpiling the smallpox vaccine for use in case of biological warfare attacks. "Its potential for devastation today is far greater than at any previous time," Henderson and 14 other experts noted in the June 9, 1999, issue of The Journal of the American Medical Association. "In a now highly susceptible, mobile population, smallpox would be able to spread widely and rapidly throughout this country and the world."

Henderson has been harshly criticized for his stance on the destruction of the official smallpox stocks. Wendy Orent, in her 1999 article, "The Smallpox Wars: Biowarfare vs. Public Health," published in The American Prospect, writes of Henderson, "He now insists that he never cared much about destruction before 1994 or 1995, when he first learned about smallpox weaponization and proliferation. Henderson hopes, through destruction, to 'raise the moral high bar' and inspire anyone growing smallpox as a weapon to destroy their stocks too. He insists that not until we destroy our stocks can the possession of illegal supplies be a crime against humanity. He hopes, by the force of his gigantic will, to force the world to yield to his increasingly irrational demand, a demand that remains the official position of the U.S. government."

On January 17, 2002, the World Health Organization, acting on fears of bioterrorism, reversed its order for the destruction of all smallpox virus stocks and recommended that the stocks be kept for research purposes, in the hope of creating new vaccines or treatments. There had been a deadline of 2002 for the destruction of the virus.

"We Should Be Prepared"

In a recent simulation of a smallpox outbreak in three American cities, scientists learned that after three months, the smallpox virus would have spread to 25 states and 15 countries, wiping out one million people. In an interview with CNN correspondents, Henderson noted, "There were some who said this is an extreme example of what might happen in a worst-case scenario. I wish I could say that, but I can't."

In a January 2001 interview with "Health Insider," on WebMD Live, Henderson expressed his concern over the possibility of bioterrorist attacks. "I believe that the risk is far greater than has ever been present in history. … As we look to the future, we see that many of the factors, which now make bioterrorism more likely, are only going to intensify. And thus, our concern is that we should be prepared. There are those who say that because we have not had major attacks of bioterrorism, that we need not be worried for the future. My only reply is that until 1941, no one had ever bombed Pearl Harbor. I'm afraid there will be a first time, and I'm afraid the time that will occur is in the not-too-distant future."

The possibility of a smallpox outbreak received more attention after the September 11, 2001, terrorist attacks on New York City and Washington, D.C. The events made people consider the possibility that a bioterrorist attack could happen. People worried about someone releasing smallpox, anthrax, or pneumonic plague in a city using crop-dusters or other means. "There is a possibility, but we still believe this is an unlikely possibility," explained Henderson. "The risk that this is going to happen is small, but it's there. It's not zero," he said in an interview with CNN.

On November 1, 2001, Tommy G. Thompson, the secretary of HHS, named Henderson the head of the new Office of Public Health Preparedness. The appointment came at a time when the government faced criticism for its lack of coordination in the anthrax attacks perpetrated by mail, which killed four people and infected more than a dozen. Henderson's responsibilities include analyzing information as it comes to HHS' bioterrorism war room and helping coordinate multiple government agencies in responding to public health threats. Henderson must bring these agencies together and create alliances with law enforcement and intelligence authorities.

According to the New York Times, Henderson "said he was committed to remaining with the government only as long as it took to create a bioterrorism preparedness program that others might carry out. Asked how long that might be, he replied by saying that he had promised the World Health Organization he would stay in Geneva for 18 months. He stayed 11 years. More than anything, Dr. Henderson said, he would like to figure out a way to persuade the countries of the world to come together to condemn the use of germs as weapons. Of smallpox, he said, 'We've got to put the genie back in the bottle."'

It is ironic, that the man who dedicated most of his career to wiping out disease in the wild, will spend the final years of his working life trying to protect people from intentional exposure to disease. "I find this unfortunate that we really have to spend as much time and effort as we are trying to combat diseases in which man is responsible for spreading it," Henderson told interviewer Susan Dentzer on the MacNeil/Lehrer News Hour's "Health Spotlight." "There's so much in the way of problems out there, tuberculosis and AIDS and malaria, that I really regard this as a very unhappy kind of interlude in my life to have to revert to, to this; but I think the problem is so important that as a citizen I just can't walk away from it."

Henderson is a husky, white-haired man with a deep, rough voice and a friendly smile. He has little patience for foolishness and red-tape. His is a strong, confident personality, and he is used to being obeyed. Although Henderson has received many awards and honorary degrees, he has not yet won the Nobel Prize, although many people feel that he should. In November 2001, when Henderson appeared in front of a U.S. House of Representative's committee, Representative Billy Tauzin, a Republican from Louisiana, introduced Henderson as "a real American hero." The legislators gave Henderson a standing ovation.