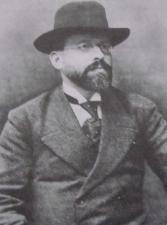 Gaetano Salvemini was born in Molfetta on Sept. 8, 1873, the second of nine children in a poor peasant family. As a child, he had little to read but the Bible and the novels of Alexander Dumas and Euge‧ne Sue. But his success on his school examinations led him to try for a scholarship at the Institute for Higher Studies at Florence, which he barely won.

In Florence he was soon caught up in the Socialist movement. His thesis on the Florentine knighthood in the Renaissance was followed by Magnati e popolani nelle commune di Firenze 1280-1295 (1899), in which he described the origins of the Florentine Republic as the product of class conflict. Salvemini saw the history of this period as one of conflict between the aristocracy and the great merchants, in which economic change brought institutional change in its wake. Though the book sold very few copies, it was considered the manifesto of the new Italian historiography. The work won Salvemini a professorial chair in 1901 and a prize from the Accademia dei Lincei that allowed him to marry Maria Minervini, whose acquaintance he had made as a student.

In 1897 Salvemini had begun to contribute to the Socialist journal Critica sociale. After his professorial appointment he helped organize secondary school teachers and joined a campaign to promote universal suffrage and universal education. At the same time he wrote La Rivoluzione francese (1905; The French Revolution), introducing to the Italian reading public the work of the French historian Alphonse Aulard, and a study Mazzini (1905), the first major analysis of this Italian statesman's ideas in the European context. These productive years were brought to a sudden end when an earthquake at Messina killed Salvemini's entire family in 1908, a tragedy from which he only slowly recovered.

In 1910 and 1913 Salvemini stood for election to Parliament but was defeated by government-instigated electoral fraud. Meanwhile he founded a new socialist journal, L'unita‧, on whose pages he fought the exacerbated nationalism of the war and immediate postwar years. In 1919 he was elected to Parliament by a large majority. But parliamentary government was already in deep trouble; in 1921, after the Fascists had gained power, he withdrew from politics. Though this move probably saved him from an assassin's bullet, it deprived the opposition of one of its most courageous leaders.

In 1925, after being arrested for clandestine anti-Fascist activities, Salvemini managed to escape and flee the country. He went first to France and England, then in 1933 to the United States to teach the history of Italian civilization at Harvard. He worked to awaken the English and American world to the dangers of fascism. He returned to Florence in 1947 and died there on Sept. 6, 1957.

Salvemini's own works, which give considerable insight into his character, include The Fascist Dictatorship in Italy (1927) and, in collaboration with George LaPiana, What To Do with Italy (1943). Also of interest is his Under the Axe of Fascism (1936). For background see Charles F. Delzell, Mussolini's Enemies: The Italian Anti-Fascist Resistance (1961). □

Vittorio Emanuele Orlando , The Italian statesman Vittorio Emmanuele Orlando (1860-1952) was the leader of the Italian delegation to the Paris peace talks after World War I and… Giacomo Matteotti , Giacomo Matteotti Giacomo Matteoti (1885-1924) was leader of the Italian Socialist Party and bitter and effective critic of Mussolini's dictatorship,… Ernesto Bruno La Padula , Padula, Ernesto Bruno La (1902–69). Italian architect, he became a member of the Italian Movement for Rationalist Architecture (MIAR). He designed th… Italian Literature , Influence of the Bible As in other European cultures, the Bible became known to the Italian literary and cultural world through the Latin Vulgate, wh… Benito Mussolini , Mussolini, Benito Benito Mussolini ruled as dictator of Italy from 1922 to 1943. His political philosophy, which he called fascism, was based on the… Enrico Morselli , MORSELLI, ENRICO (1852-1929) Enrico Morselli, an Italian psychiatrist, academic, and active promoter of the Italian positivist school of neuropsychia…