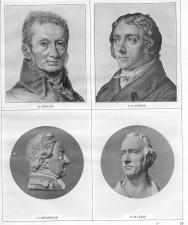 Barthold Georg Niebuhr (1776-1831), German historian and statesman, is best known for his original, trailblazing work and lectures in Roman history. He initiated a new method of critical historical scholarship.

Barthold Georg Niebuhr son of Karsten Niebuhr, an explorer and Danish government official, was born in Copenhagen on Aug. 26, 1776. After studying at the University of Kiel (1794-1796), where he became acquainted with the philosophy of Immanuel Kant, Niebuhr accepted a position as private secretary to the Danish minister of finance in Copenhagen. Niebuhr studied agriculture and physical science in London and Edinburgh (1798-1799). On his return to Copenhagen he entered the Danish state service, developed great expertise in financial matters, and was appointed director of the Danish National Bank in 1804.

In 1806 Baron Stein offered Niebuhr an appointment in the Prussian state service. Arriving in Berlin on the eve of the Battle of Jena, which led to the collapse of the Prussian state, he joined the Prussian government in its flight to Königsberg and Riga. In 1810, after Stein's dismissal, Niebuhr resigned because he could not work with Stein's successor.

Niebuhr remained in Berlin, became a member of the Berlin Academy of Sciences, and started his famous lectures on Roman history. Out of these lectures emerged the first two volumes of his Roman History (1811-1812). He rejoined the Prussian government service in financial affairs (1813-1816), publishing the semiofficial Preussischen Korrespondenten and writing extensively in support of Prussian annexation of Saxony.

Disappointed by the narrowness of the Restoration climate after 1815, Niebuhr accepted an appointment as Prussian ambassador in Rome, where he served until 1823. During this time he continued his studies in Roman history. In the Cathedral library of Verona he discovered the long-lost Institutes of Gaius (later edited by Karl von Savigny), which had served as a basis for the "Institutes" of Emperor Justinian's great codification of Roman Law. Niebuhr also discovered and published fragments of Cicero and Livy and participated in the edition of Cicero's De republica (1820).

In 1823 Niebuhr became a professor at the University of Bonn. He rewrote and republished Roman History (1827-1828) and completed the third volume (published 1832), bringing the story to the end of the First Punic War. He died in Bonn on Jan. 1, 1831.

Niebuhr filled history, which up to that time had been viewed as a grand painting of philosophical or esthetic edification or as a fragmentary pile of individual learned discoveries, with the life of hard reality. He pioneered the introduction of philological methodology and introduced social history as a new discipline. His impact on his contemporaries is best exemplified by J. W. von Goethe: "It was really Niebuhr and not Roman history which intrigued me. His penetrating mind and his diligent ways were what really edified us. All those agrarian laws did not really interest me; but the manner in which he explained them, the way in which he clarified complicated relations, was of benefit to me, and laid upon me the obligation to proceed in like manner in the performance of my own tasks."

The two major English translations of Niebuhr's works are by Leonhard Schmitz: Lectures on the History of Rome (2d ed., 3 vols., 1849-1850) and Lectures on Ancient History (3 vols., 1852). The best, although short, English evaluation of Niebuhr's life and work is in George Peabody Gooch, History and Historians in the Nineteenth Century (1913; rev. ed. 1965). Niebuhr is discussed in William Ward Fowler, Roman Essays and Interpretations (1920), and Sir John E. Sandys, A History of Classical Scholarship (1921).

Tod, Robert James Niebuhr., Barthold Georg Niebuhr, 1776-1831: an appreciation in honour of the 200th anniversary of his birth, Cambridge: Printed by Nicholas Smith at the University Library, 1977. □