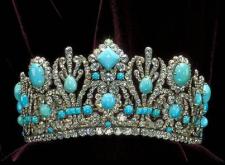 oxford
views updated
Marie Louise (1791–1847) French Empress. Daughter of Emperor Francis II, she married Napoleon I in 1810. A son, the future Napoleon II, was born in 1811, and she acted briefly as regent during Napoleon's absences on campaign. Alienated from him by 1814, she became Duchess of Parma.