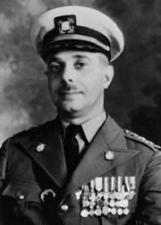 Rafael Leonidas Trujillo Molina (1891-1961) presided for 31 years over what was probably the most absolute and ruthless dictatorship in Latin America at that time. Coming to power in 1930, he controlled the government of the Dominican Republic until he was assassinated.

Rafael Trujillo was born on Oct. 24, 1891, the son of lower-middle-class parents. He received a rudimentary education and then held various jobs. His first step toward his future career was taken on Dec. 9, 1918, when he was accepted for training as an officer in the Constabulary Guard, then being organized by the U.S. Marines, who were occupying the Dominican Republic. Emerging from training, he rose rapidly in the new military organization. Soon after Horacio Vázquez was inaugurated as president in 1924, Trujillo was named second-in-command of the Guard. On June 22, 1925, he became its commander in chief.

Gen. Trujillo came to the presidency as the result of a crisis during the early months of 1930. During a revolt against President Vázquez, Gen. Trujillo remained "neutral." As a result, Vázquez resigned, a provisional government was established, and elections were called. However, real power was in the hands of Trujillo, who proclaimed his candidacy for president. Supporters of his opponent were jailed, beaten up, and killed, thus assuring Trujillo's victory.

Soon after taking office, Trujillo was faced with a major natural disaster, a hurricane that virtually wrecked the capital city, Santo Domingo. He used this incident to place the country under martial law and took energetic steps to clear up the damage, take care of refugees, and start to rebuild the capital. Six years later the city council of Santo Domingo renamed the city Ciudad Trujillo in honor of this event. This was the first of many honors Trujillo in effect granted to himself. These included renaming half the provinces after him and members of his family, creating numerous decorations of which he was the first and sometimes the only recipient, renaming streets after him throughout the republic, and building numerous monuments in his honor.

Trujillo was in unchallenged control of the government. He served as president from 1930 to 1938, chose a puppet to succeed him then, but returned as president in 1942, remaining until 1954. He then chose his youngest brother, Hector, to occupy the post. In 1960, when the Trujillo regime was under strong international pressure, Hector Trujillo gave way to Vice President Joaquín Balaguer, who served until February 1962, nine months after Rafael Trujillo's death.

Even when out of office, Rafael Trujillo dominated the government. He remained commander in chief of the armed forces. All secret police services reported directly to him. As head of the only legal political party, he sent to Congress the name of a successor to anyone who resigned from that body, according to provisions of one of the several constitutions he had written. He also held the undated resignations of all public officeholders and submitted these when it suited his fancy. As a result, in one 4-year period, there was more than a 200 percent turnover among the members of the Chamber of Deputies.

Trujillo also completely dominated the economy of the country. He allotted various sectors to members of his family. His wife controlled imports and exports; his various brothers dominated radio and television, prostitution, and some manufacturing industries. Trujillo himself concentrated on agriculture, grazing, and industry, forcing all but one of the nation's sugar-producing firms to sell out to him, seizing vast estates from Dominican owners, and including himself as partner in virtually every industrial enterprise in the country. His fortune was estimated in the late 1950s at about $500 million.

Trujillo frequently interfered in the affairs of neighboring countries. When men who had attempted to assassinate Venezuelan president Rómulo Betancourt early in 1960 admitted that they had been sent by Trujillo, a special conference of the Organization of American States proclaimed a partial economic boycott of the Dominican Republic.

On May 30, 1961, Trujillo was assassinated on the outskirts of the Dominican capital. Within 6 months his whole family was in exile, and what he himself had called the Trujillo Era was at an end.

The two best works on Trujillo are Germán E. Ornes, Trujillo: Little Caesar of the Caribbean (1958), and Robert D. Crassweller, Trujillo: The Life and Times of a Caribbean Dictator (1966), both of which are critical but factual. A very hostile study of his regime is Albert C. Hicks, Blood in the Streets: The Life and Rule of Trujillo (1946). Sander Ariza, Trujillo: The Man and His Country (1939), and Abelardo René Manita, Trujillo (5th rev. ed. 1954), are adulatory. □