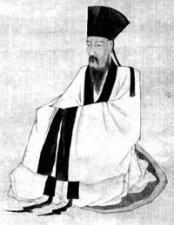 Wang Yang-ming (1472-1529) was a Chinese philosopher and government official. He led the revolt against the orthodox Neo-Confucianism of Chu Hsi and founded the Yang-ming school, which later dominated Chinese thought.

Born Wang Shou-jen into a scholar-official family in a district southeast of Hangchow, Chekiang, Wang Yang-ming exhibited in his teens a spirit of adventure and a questioning of orthodox beliefs. He became obsessed with Neo-Confucianism at age 17, when a noted Confucian scholar told him that one could become a sage through learning. Besides his classical studies, Wang interested himself in the military arts, the practice of Taoist technique of breathing to prolong life, and Buddhist philosophy.

Wang passed the examination for chin-shih, the highest academic degree, in 1499, and then served as a secretary in the Ministry of Justice, later of War. But he twice left office, first because of illness, then because of his offending a powerful eunuch in trying to save an official's life, but these temporary reliefs from public duties gave him the leisure to deepen his thinking. In 1508, during a banishment in Kweichow, he came to the realization that to investigate the principle of things is not to seek for them externally on actual objects, as Chu Hsi had taught, but to look for them in one's own mind. A year later he formulated the epoch-making theory that knowledge and action are one.

Emerging from his exile in 1510, Wang was appointed a district magistrate in Kiangsi. There he initiated several reform measures that were prototypes in his later administration and made him famous in government. In the following year he served in various ministries at Nanking and Peking, returning to Kiangsi as governor in 1516. He suppressed the bandits, reorganized the administration, and introduced social reforms, the most significant of which was the setting up of the community compact. Meanwhile, he further developed his philosophy and took a position against the criticism of the followers of the Chu Hsi school.

In 1519 Wang took charge of the suppression of an imperial prince who staged a rebellion in Kiangsi. Wang succeeded in capturing the rebel, but his victory aroused the jealousy of his opponents at court; only when Wang submitted a report deemphasizing his own efforts did criticism subside. Late in 1521 he was made the Earl of Hsin-chien, but he retired shortly upon his father's death.

During these years Wang made significant strides in his philosophical achievements. In 1521 he enunciated the doctrine of the extension of innate knowledge, which he described as the "original substance of the mind." His last official assignment occurred in 1527, when he was recalled from retirement to crush a tribal uprising in Kwangsi. There he contracted an illness and died 2 years later. Despite his meritorious service, he fell under the malice of his enemies at court and the traditional honors were withheld. Only in 1567 was he honored with the title of Marquis and the posthumous name Wen-ch'eng, meaning "completion of culture."

The Neo-Confucian idealist movement of Wang Yangming arose as a reaction against the Neo-Confucian rationalism of Chu Hsi, which had dominated Chinese thought since the 12th century but which had become stereotyped, narrow, and devoid of originality by the time of the Ming dynasty. Championing against this empty and lifeless tradition, Wang advocated sincere convictions and outright actions emanating from one's own intuitive mind and presented four basic concepts: love as exemplified in the great man's forming one body with the universe, the identification of one's mind with principle (li), the extension of native knowledge, and the unity of knowledge and conduct.

These concepts can be briefly illustrated as follows. First, in forming one body with heaven and earth, the great man eliminates selfish desires and obscurations, reveals his true character, and fully develops his nature. This is love, which, by extension, is the will to live, the process of unceasing production and reproduction; it is also filial piety, brotherly respect, and the like.

Second, following Lu Hsiang-shan (Lu Chiu-yüan), Wang equates principle with mind, of which principle is the order, and material force (ch'i) is the function. As this original mind manifests itself, there is native knowledge; to extend this native knowledge is the supreme duty of man.

Third, while extension of knowledge depends on investigation, unlike Chu Hsi who interpreted investigation (ko) as intellectual investigation of things, Wang argued that ko meant rectification of the mind. To him all principles are contained in the mind and are discoverable if the mind is clear and calm; such a state can be achieved through the method of tranquility, that is, the elimination of self-desires, self-examination, quiet sitting, and the like.

That Wang gave priority to firm purpose, a will to work, and social and political responsibilities distinguished him as a true Confucian; and though he adopted Buddhist and Taoist overtones and practices, he rejected selfish renunciation of human relations and of social responsibility. In time his followers spread all over China, and the school set off a strong movement that was to overshadow the Chu Hsi orthodoxy during the next century. His influence also extended to Japan, where, as the O-yo-mei school, Wang's ideas inspired the great leaders of modern reforms and produced some of Japan's leading thinkers.

Although the movement in China declined in vitality toward the end of the 16th century, its impact was again felt in the 20th, especially in Sun Yat-sen and other leaders of the revolution who zealously admired Wang's idealism and personality. Wang left several volumes of philosophical writings and literary works, many of which are available in English translation.

The most useful interpretation of Wang Yang-ming's life and thought is the introductory chapter in his Instructions for Practical Living and Other Neo-Confucian Writings, translated with notes by W. T. Chan (1963). Wang's writings are available in The Philosophy of Wang Yang-ming, translated by Frederick G. Henke (1916); W. T. De Bary, ed., Sources of the Chinese Tradition (1960); and W. T. Chan, comp. and trans., A Source Book in Chinese Philosophy (1963). A study of Wang in English is Carsun Chang, Wang Yang-ming: Idealist Philosopher of Sixteenth-century China (1962). Fung Yulan, A History of Chinese Philosophy, translated by Derk Bodde (2 vols., 1952-1953), is recommended for general historical background.

oxford
views updated
Wang Yang-ming (Jap., Ō Yōmei; 1472–1529). Chinese philosopher, soldier, and statesman, of the Ming dynasty. He was a follower of the Confucian school who incorporated into his own teachings Buddhist and Taoist insights. His principal tenets include the unity of knowledge and action and the paradoxical identity between mind and heart (hsin) and li (‘principle’, referring to being, and to virtue). The Yangming school became very popular in late Ming China (16th cent.), and spread as well to Japan, as Yōmei-gaku, where it gained adherents among the lower samurais, many of whom worked actively for the success of the Meiji restoration in the 19th cent.

Philosophy , PHILOSOPHY in America has encompassed more or less systematic writing about the point of our existence and our ability to understand the world of whi… Saint Augustine Of Hippo , St. Augustine, also known as Aurelius Augustinus, was one of the key figures in the transition from classical antiquity to the Middle Ages. He was bo… Thomas Hobbes , HOBBES, THOMAS (1588–1679) Thomas Hobbes, often called the father of modern analytic philosophy, was born in Malmesbury, Wiltshire, England. Hobbes l… Confucianism , FOUNDED: c. 1050–256 b.c.e. RELIGION AS A PERCENTAGE OF WORLD POPULATION: 0.1 percent The term Confucianism is derived from Confucius, the convention… Lin Yutang , Lin Yutang Lin Yutang Chinese writer, philosopher, translator, and poet, Lin Yutang (1895–1976), wrote more than 35 books in English and Chinese, and… Testimony , TESTIMONY The term testimony in contemporary analytic philosophy is used as label for the spoken or written word, when this purports to pass on the s…