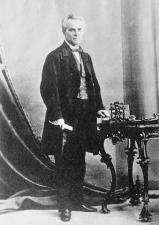 Sir Alexander Tilloch Galt (1817-1893) was a Canadian politician responsible for the financial provisions of Canadian federation as well as for some of Canada's first steps in diplomacy.

Alexander Galt was born in Chelsea, London, on Sept. 6, 1817, the youngest son of John Galt, the Scottish novelist. His father was the agent for a Canadian land company, and young Galt himself went to Canada in 1835 as a clerk in the British American Land Company, which owned half a million acres of land in the Eastern Townships, between the St. Lawrence River and the United States border. He rose to become secretary and later commissioner of the company. Through this work he became interested in railway promotion, first in the region owned by the company and, later, with the construction of the Grand Trunk Railway, in the St. Lawrence Basin.

Galt entered politics in 1849, representing Sherbrooke County, in the center of his company's holdings. This period in the legislature was brief, but he was reelected in 1853. As early as 1856 Galt began urging the federal union of the two Canadas rather than the legislative one.

Galt soon established himself as the leader of the English-speaking members of the Assembly from Canada East and in July 1858 was invited to enter the Macdonald-Cartier government as minister of finance. He accepted on condition that the ministry support a resolution favoring a federal union of British North America which would be pressed on the British government. The idea of federation was premature at this time, and Galt and his colleagues had no success in urging it on the Colonial Office. Galt laid the basis for a protective tariff during these years through providing additional duties on manufactured imports.

Out of office from 1862 to 1864, Galt returned to the finance portfolio in the coalition ministry that was formed to bring about a general federation of the British American colonies. In the confederation negotiations his financial skill was crucial in arranging the subsidy system intended to provide the necessary revenues for the poorer provinces of the new union.

On the formation of the first ministry of the new Dominion, in July 1867, Galt again became minister of finance. His tenure was short, however, for his independent nature brought him into disagreement with the leader of the government, John Alexander Macdonald, and he resigned in October. He retired from Parliament in 1872.

In the latter part of his life Galt made several ventures into diplomacy on behalf of Canada. In 1875 he served on the Halifax Fisheries Commission; in 1878 and 1879 Galt attempted unsuccessfully to negotiate commercial agreements with France and Spain; and he served as first high commissioner of Canada in London from 1880 to 1883. Galt's last years were spent in directing various enterprises in the western prairies in which his family was interested, notably irrigation, coal, and railroad ventures. He was knighted for public services in 1869 and died in Montreal on Sept. 19, 1893.

Otter, A. A. den (Andy Albert den), Civilizing the West: the Galts and the development of western Canada, Edmonton, Alta., Canada: University of Alberta Press, 1982.