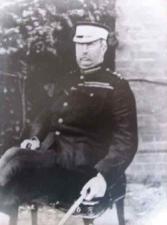 oxford
views updated
Buller, Sir Redvers Henry (1839–1906). Soldier. Buller was a man of outstanding personal bravery, but his indecisiveness in high command cast a shadow over his later career. He took part in the Zulu War (1878–9), winning the Victoria Cross, and in the Gordon relief expedition in the Sudan (1884–5). He then climbed the army ladder steadily until refusing the post of commander-in-chief in India, before reluctantly agreeing to command in South Africa in 1899 at the beginning of the second Anglo-Boer War. He then made the unwise decision to divide his force into three columns, he himself commanding one. This resulted in a series of piecemeal defeats and his replacement in overall command by Lord Roberts. Buller's subsequent leadership of his own column demonstrated the same qualities of hesitation, and his later public attempt to refute his critics was not well received.

Sir James Clark Ross , Sir James Clark Ross, 1800–1862, British polar explorer and rear admiral. In 1818 he accompanied his uncle, Sir John Ross, in search of the Northwest… Sir Gawain , Skip to main content Sir Gawain Ten Commandments , Commandments, Ten A group of moral precepts in the Pentateuch, known also as the Decalogue, always regarded as of basic importance in both Judaism an… Royal Society , Royal Society, oldest scientific organization in Great Britain and one of the oldest in Europe. It was founded in 1660 by a group of learned men in L… Ladysmith , Ladysmith. Town in northern Natal, scene of a siege by Afrikaner forces during the second Anglo-Boer War. Ladysmith became the main British military… Sir John Oldcastle , Oldcastle, Sir John Sir John Oldcastle, 1378?–1417, English leader of Lollardry. He married the heiress of Lord Cobham in 1408 and was known as "the…