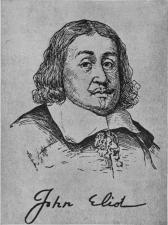 oxford
views updated
Eliot, Sir John (1592–1632). Eliot, a parliamentarian, was initially a client of the royal favourite Buckingham, but turned against him. In 1626 he took part in the impeachment proceedings against Buckingham, comparing him to Sejanus, the notorious favourite of Tiberius. For this, Charles I imprisoned him in the Tower. Further imprisonment followed in 1627, when Eliot refused to pay the forced loan. In 1629 he led the Commons' attack on Arminianism and prerogative taxation, and organized the coup on 2 May when the Speaker was held down in his chair to prevent him foreclosing debate, as the king had ordered. Eliot was again sent to the Tower, where he spent the rest of his life composing a treatise exalting royal authority. His commitment to parliamentary liberties was undoubted, but by preferring the role of demagogue to that of constructive statesman he blocked the way to compromise.