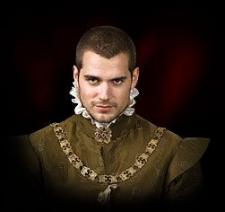 oxford
views updated
Suffolk, Charles Brandon, 1st duke of (1484–1545). Brandon managed a spectacular career from modest beginnings. A son of Sir William Brandon, standard-bearer for Henry VII at Bosworth, where he was killed, Brandon's rise began with the accession of Henry VIII in 1509: the king was seven years his junior. They were both fond of athletic pursuits and Brandon excelled in jousting. In 1515 he was given the wardship of Elizabeth, Lady Lisle, and created Viscount Lisle. The Garter followed. He fought in the campaign in France in 1513 and in February 1514 was made duke of Suffolk a few months after the death of the last de la Pole duke. His most extraordinary advance came in 1515 when, six weeks after the death of her husband Louis XII, he married Mary, queen of France and sister of Henry VIII. Brandon bought himself out of the king's anger with gifts. After this, despite Mary's death in 1533, he continued in favour, serving as earl marshal 1524–33, lord president 1530–45, chief justice in Eyre south of Trent 1534–45, and lord steward 1540–5. He commanded against the Pilgrimage of Grace in 1536 and campaigned in France in 1544. His two sons died of the sweating sickness in 1551, when the dukedom became extinct.

Lady Jane Grey , Grey, Lady Jane (1537–1554) Grey, Lady Jane (1537–1554) Teenaged usurper of the English throne who reigned for nine days before being executed in the… Henry Grey Duke Of Suffolk , Henry Grey Suffolk, duke of, d. 1554, English nobleman. He became 3d marquess of Dorset on his father's death (1530), and in 1534 he married Frances,… Mary Tudor , Mary Tudor (1495–1533), queen of France and duchess of Suffolk. Mary Tudor was Henry VIII's younger sister and from her descended the claim of Lady J… Catherine De Medici , Catherine de' Medici Catherine de' Medici Catherine de' Medici (1519-1589) was a Machiavellian politician, wife of Henry II of France, and later rege… Catherine Of Valois , Catherine of Valois (1401–37), queen of Henry V. Youngest daughter of Charles VI of France, Catherine was sent at an early age to a convent. Her marr… Diane De Poitiers , de Poitiers, Diane (1499–1566) A famous consort of the French king Henri II, Diane de Poitiers was born of aristocratic parents in the castle of Sain…