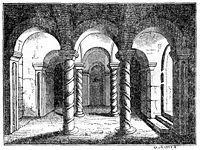 oxford
views updated
Æthelbald (d. 757), king of Mercia (716–57). In his time any member of an extended royal family had an accepted chance to capture the throne. This is the background to the young Æthelbald's being driven into exile in the reign of his second cousin Ceolred, and to his succeeding Ceolred as king. Bede tells us something weighty about Æthelbald's success as king. Writing in 731 he says that all the kingdoms of the English, south of the Humber, are under the authority of Æthelbald. A charter of 736 describes Æthelbald in language which supports this claim, one terming him king of all the kingdoms of the South English and even king of Britain. His relations with the church were forceful. He seems to have established a firm exploitation of monasteries and he misconducted himself with nuns. He died at the hands of his own military household. Our fragments of knowledge suggest the creative authority of a mighty ruler.

Cush , Cush Type of Government Cush was a monarchy with a unique mix of African and Egyptian features. Power was concentrated in the hands of the king, the… Jecholiah , Jecholiah Biblical woman . Pronunciation: Jek-uh-LIGH-uh. Married King Amaziah; children: King Azariah (or Uzziah). Jecholiah Biblical woman. Pronunc… Carol Ii , Carol II, 1893–1953, king of Romania, son of King Ferdinand and Queen Marie. While crown prince, he contracted a morganatic marriage with Zizi Labrin… Egbert , Egbert Egbert (d. 839), king of Wessex. After a profitable three-year exile in the kingdom (and then the empire) of Charles the Great, Egbert succeed… Kenneth Ii , Kenneth II (d. 995), king of ‘Scotland’ (971–95). His father was Malcolm I and his brother King Dub. He succeeded Cuilén to the kingship, but faced c… Rhys ap Gruffydd , Rhys ap Gruffydd (1132–97), king of Deheubarth (1155–97), known as ‘the Lord Rhys’. The younger son of Gruffydd ap Rhys, king of Deheubarth, and Gwen…