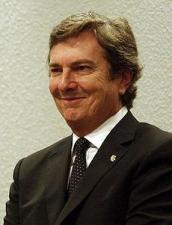 Brazilian businessman and politician Fernando Collor de Mello (born 1949) became that nation's youngest president in 1990. He brought a dynamic, effervescent style to the leadership of a nation saddled with enormous debt and pressing social problems.

Born in Rio de Janeiro on August 12, 1949, Collor was raised largely in the poverty-ridden interior state of Alagoas, far from the centers of Brazilian power. His father, a wealthy businessman, served as governor of Alagoas, and other members of the Collor family served in government and business in positions of influence. He studied economics and journalism at the state's Federal University in Brasilia and began his career within the Collor family empire. Phenomenally successful as a media businessman, Collor gathered both wealth and renown, and gained some international notoriety as somewhat of a playboy. He first married Lilibeth Monteiro de Carvalho, a teenage aristocratic heiress in 1975, with whom he had two sons, but they divorced in 1981. He entered politics in 1979 when he became mayor of Maceió, capital city of Alagoas. He served ably in that capacity until 1982, and then decided to take advantage of the policy of abertura, or gradual political democratization, permitted by General João Batista Figueiredo, last of the five generals who ruled Brazil from 1964 to 1985.

In 1982 he was elected to the Brazilian Chamber of Deputies, serving the nation in Brasilia for four years as its youngest congressman, representing Alagoas. While in Congress his interest in, and official concern with, economic matters became marked, and he achieved sufficient publicity as a no-nonsense financial reformer. His special cause was the long-neglected northeast, including Alagoas, and he was easily elected governor of his home state in 1986. Meanwhile, in 1984, he had been remarried to Rosane Malta, a college freshman from Alagoa.

As governor, Fernando Collor won a reputation for his statewide economic reforms, focusing on administrative efficiency, campaigns against corruption, and championship of major new social welfare measures. Regardless of his own personal wealth and good looks, the energetic governor gained a strong and devoted following among his state's less-advantaged. A national reputation was assured for his prosecution of highly paid state bureaucrats, and he became known as "the hunter of the Maharajahs."

The young governor and his wife were the center of a Brazilian state "Camelot," his outgoing, charming personality enhanced by an almost fanatical devotion to physical fitness and sports—he was national karate champion, among other distinctions. Able to communicate easily in English, French, Spanish, and Italian as well as his native Portuguese, Collor was often in the company of distinguished foreign visitors. He was, in short, something of a media event himself.

In 1989 Collor began his campaign for the presidency as candidate of the small National Reconstruction party, which controlled but five percent of the seats in Congress. Pledging to restructure the national economy, to protect the environment and ecology, and to initiate a responsible fiscal policy (which includes privatization of inefficient publicly-owned industries), Collor unleashed a media blitz unparalleled in Brazilian history. A bitter reaction by his two opponents revived long-standing class and religious antagonisms.

Although polls showed some erosion in support as the November 15 election approached, Collor's vision of "O Brasil Novo" ("The New Brazil") inspired enough voters of all social classes to lead the field of six candidates in the election, albeit with less than the constitutionally-mandated majority of votes cast.

Thus, a run-off election was scheduled for December 15, pitting Collor, an admirer of free-market economics and (more than any other Brazilian leader) the United States, against Leftist Luis "Lula" da Silva, candidate of the Workers' party. The final campaign was fierce and vitriolic, but despite Collor's elite status, his vision of a strong and modern Brazil, tied to the world's advanced democracies and combating both horrific inflation (up to 80 percent monthly) and government corruption, was sufficient to give him a slender electoral majority of 53 percent.

To help boost his image at home and give himself credibility abroad, the president-elect launched himself into a whirlwind of visits to foreign leaders. Following trips to neighboring Argentina, Paraguay, and Uruguay, his next official venue was—pointedly—the United States, where he conferred with President George Bush and other government and international lending organization officials. He then continued on, maintaining an exhausting pace, to Tokyo, Moscow, Bonn, Rome, Paris, London, Lisbon, and Madrid. All made for colorful and heartening headlines in Brazil while generating goodwill and initial trade and debt talks abroad. Somehow, amidst this whirlwind, he also restructured Brazil's executive branch, reducing the 23 Cabinet departments to 12 "super ministries." The key Ministry of the Economy he surprisingly gave to 36-year-old economist Zelia Cardoso de Mello.

By the date of his March 15 inauguration it was clear that Collor was poised to act immediately on two crucial fronts, both of them sensitive in the extreme. Announcing that "Brazil's efforts with the Third World have not given us anything concrete," Collor signaled a major shift in Brazilian foreign policy designed to bond and integrate the nation with the United States (and other nations of the hemisphere) and the other important Western industrialized states. Domestically, in an attempt to curtail inflation, he announced a return to the cruzeiro unit of currency and a draconian package of economic austerity measures. Within this package was abandonment of wage and price indexing, temporary freezes of both, a crackdown on tax-dodgers, severe paring of the ranks of the federal bureaucracy, a freeze of 18 months on bank accounts, and a start on renegotiating Brazil's $110 billion foreign debt.

Collor confronted truly daunting problems, but he did so with a stronger rating in the polls than he enjoyed on election day, and many Brazilians were betting that his youth, optimism, "can do" attitude, and seemingly boundless energy would triumph. In 1991 Collor focused government attention on the need for creating home reservations for Brazil's native peoples. He also mounted a campaign urging the Group of Seven, the creditor nations, to help Brazil protect the Amazon Rainforests.

His reform efforts failing to produce progress in the eyes of the Brazilian public, Collor was impeached by the Chamber of Deputies on corruption charges in the fall of 1992. Before the trial began in December, and maintaining his innocence, he stepped aside to allow Vice-President Itamar Franco to become acting president. At the opening of his impeachment trial before the Brazilian Senate, Collor announced his resignation. He was convicted of corruption charges by a vote of 76 to 3. He was then barred from holding public office for eight years, and also faced possible criminal prosecution. In 1994, Collor was exonerated by the highest court in the land of all charges brought against him.

Information about Fernando Collor de Mello is scarce, but some can be obtained from the Brazilian Embassy, the New York Times, and Times of the Americas, as well as Brazilian newspapers. For recent background, see E. Bradford Burns, History of Brazil (1987), and the citation of Collor in Current Biography Yearbook (1990). His acquittal is reported on in the Dec. 24, 1994 issue of Time. □